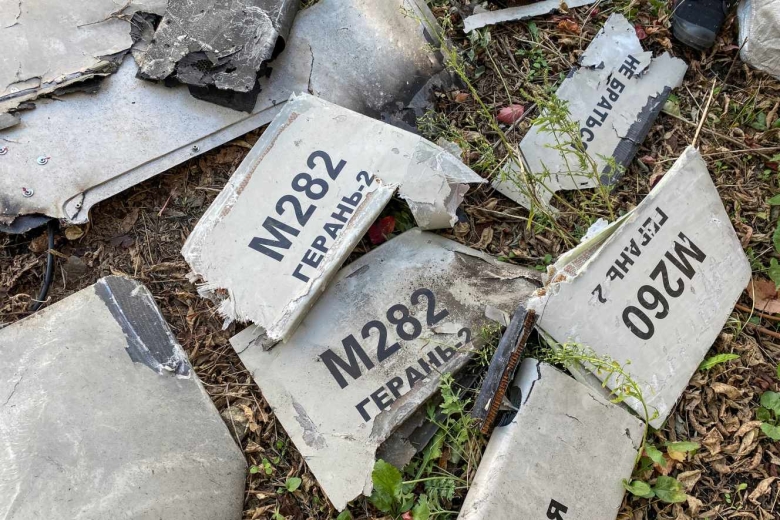 Debris from an Iranian Shahed-136 drone also known as the Geran-2 in the Kharkiv region on October 6, 2022. STRINGER / REUTERS

Iranian-made Shahed-136 drones attacking Ukrainian cities are the most obvious indicators to date that Iran has become a threat to Ukraine and its European neighbors. According to the Ukrainian Foreign Ministry, Shahed drones have killed and wounded many civilians and have damaged hundreds of residential areas, power stations, bridges, hospitals, sewage plants and schools in a number of Ukrainian cities.

On January 2, 2023, Ukrainian president Volodymyr Zelenskyy released a video address providing some insights into what he believes is Russia’s latest strategic weapon: the Shahed-136 drones aiming to ‘exhaust’ Ukraine.  Zelenskyy said, “Only two days have passed since the beginning of the year, and the number of Iranian drones shot down over Ukraine is already more than eighty. This number may increase in the near future. Because these weeks the nights can be quite restless. We have information that Russia is planning a prolonged attack with Shaheds. Its bet may be on exhaustion. On exhaustion of our people, our air defense, our energy sector.”

Only four days earlier, on December 29, 2022, Ukraine was attacked by 16 Shahed drones with seven of them hitting the capital Kyiv. The first reports that Russia has been using Shaheds came to the surface around mid-September last year, when several drones were used against targets near Kupiansk, a city in the Kharkiv region, in Odesa and Mykolaiv. Again in October, they were used against civilian targets in the city of Bila Tserkva, south of Kyiv.

Shortly after the Bila Tserkva attack, Kyiv openly accused Tehran of supplying the Russians with Shahed drones. On October 11 of last year, Zelenskyy give a speech to the leaders of the G7, claiming that the Russians have purchased thousands of Shaheds. “The enemy used more than a hundred cruise missiles and dozens of different drones, including Iranian Shaheds. And every ten minutes I receive a message about the enemy's use of Iranian Shaheds (…) according to our intelligence, Russia ordered 2,400 Shaheds alone from Iran,” said president Zelenskyy.

At first Tehran strongly denied the accusation calling it “baseless” and said it was ready for talks with Kyiv to clarify the matter. However, it was only two weeks later that Iran admitted it did supply Russia with a limited number of drones, claiming the drones were delivered “many months” before the Russian war against Ukraine started and that it has halted further deliveries.

Israel-Alma Research and Education Center, debunked the Iranian’s “many months” ago claim. It has collected data proving that the process of purchasing of Shaheds by Moscow began with a secret Russian delegation visit to the Kashan region of Iran in June 2022.  Israel-Alma also rereleased a video on its twitter account showing that last August, Russian soldiers were taking part in training exercises in Kashan to learn how to operate unmanned aerial vehicles.

On December 10, 2022, US National Security Council spokesman John Kirby said that Iran is giving the Russians an unprecedented level of military support.  Kirby stated that the partnership between Iran and Russia to produce drones is a dangerous development with devastating consequences not only to Ukraine but also to the entire world.  "Russia is seeking to collaborate with Iran in areas like weapons development, training," he said, adding that the US administration fears that Russia intended to "provide Iran with advanced military components" including helicopters and air defense systems. He continued saying that "Iran has become Russia's top military backer," Kirby said.

Shahed-136 are Effective and Cheap to Produce

Shahed-136 drones are unmanned aerial vehicles (UAVs) are also known as “Kamikaze” drones because they are destroyed in the attack and are so named after the Japanese fighter pilots who flew suicide missions in World War Two.

The Shahed-136 is made by the Shahed Aviation Industries Research Center, which has ties to the Islamic Revolutionary Guards Corps Aerospace Force and the government-owned Iran Aircraft Manufacturing Industries Corporation.

The Shahed-136 officially entered service with the Iranian military in 2021. But the drone, its variants, and predecessors have reportedly also been used by Houthi rebels fighting in Yemen in recent years. Drones similar to Shahed-136 have been used against targets in the UAE and Saudi Arabia, such as the one in September 2019 which hit the Saudi oil installation in Abqaiq. The damage was so massive that the installation was shut down for two months.

Dr. Uzi Rubin, a leading expert on missile defense and a Senior Researcher at Jerusalem Institute for Strategy and Security (JISS), explains the advantage of using Shahed-136 suicide drones. To begin with, they are very cost effective to produce and much cheaper than a drone-missile as the production of single Shahed drone costs roughly $20,000. “It is very easy to operate – just upload the target coordinates and launch it with a small booster rocket – and very hard to detect by radars or electro-optic devices because of its tiny size (wingspan of about two meters), its slow speed – usually below the threshold of detection of most radars with its tiny infrared signature,” Dr. Rubin said.

Shahed drones are slow, with a maximum speed of 115 mph, maximum range of 1,550 miles and a quite big warhead weighing between 30-50 kg. Their piston engines are very loud and while the loud noise can warn that a Shahed drone is coming, they are not designed to be fired individually but rather they are dispatched in large numbers.

According to Ukrainian officials, since September their armed forces have shot down thousands of Shaheds. Nonetheless, it is important to point out that it’s nearly impossible to shoot down every single Shahed drone because "They fly low and you can send them in waves. These swarms of drones are much harder to counter by air defences," states Justin Crump, a military expert.

The diplomatic efforts to end the war have massively failed and the conflict could be a "long-term process".

Moreover, in the past few weeks there have been a number of reports citing unnamed Western security officials claiming that the Russians and the Iranians have reached a deal for Shahed drones to be mass-produced in Russia. If these reports are shown to be genuine, it could mean the production line could be up and running within few months and leading to a “long-term” war.

The fact that both countries are moving even closer in the military and political fields, should be a concern not only to the neighbors of Ukraine. This should also ring alarm bells for the entire international community, and more specifically to Iran’s neighbors in the already politically volatile Middle East region. Iran’s supplying Moscow with Shaheds and deploying Iranian personnel on Russian soil are coming at a price, meaning Moscow may now be more open to supply Iran with technically superior and more lethal military hardware like Sukhoi Su-35 fighter jets which Iran been keen to acquire.

This begs the question, why isn’t the Biden administration and its allies in NATO not taking decisive measures to strangle this Tehran’s military deals before it’s too late? 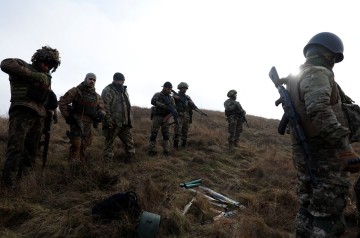 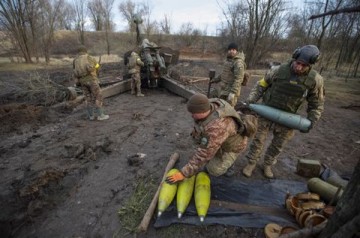 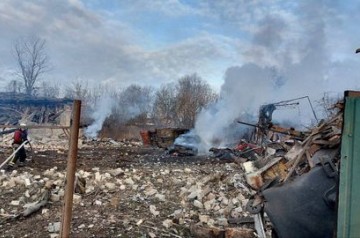