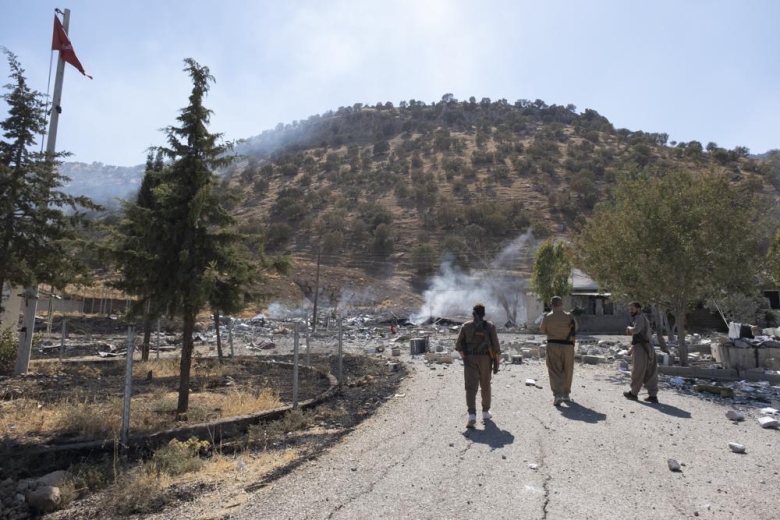 Iran’s Islamic Revolutionary Guard Corps (IRGC) has frequently violated Iraqi sovereignty by firing missiles and drones at a number of targets in Iraq’s semi-autonomous northern Kurdistan region (KRG). Esmail Qaani, IRGC’s Quds Force Commander and Iran’s man in Iraq, has also travelled to Iraq for high-level meetings, threatening and demanding of the Iraqi government that it disarm or relocate three Iranian Kurdish opposition groups that are based in in Iraqi Kurdistan.

The IRGC alleges, “These terrorists - who are backed by global arrogance and are based in the Iraqi northern region – were forced to flee the country after sustaining heavy casualties.” The IRGC statement reveals that officials of the KRI are turning a deaf ear to their repeated bluster and have taken no measures to curb the activities of “these terrorists.”

Iraq’s Prime Minister Mohammed Al-Sudani was nominated to his post thanks to the Iran-backed Shia Coordination Framework, the largest parliamentary bloc. He recently said that his government shares the wishes of the Iranian government insofar as Iraq also wants to shut the bases and disarm those groups. However, he added that leaders of the Iraqi Kurdistan region have refused despite repeated requests from his government.

In late November, the Iranian regime sent a letter to the United Nations demanding that Iraq shut down these groups, stressing Iran’s “inherent right to self-defense under international law.” The letter reads: "For years, the Islamic Republic of Iran has been a target of terrorist groups based in the Iraqi Kurdistan Region. They have recently intensified their activities by illicitly transferring a huge quantity of weapons into Iran to arm their affiliates who intend to carry out terrorist operations."

The drumbeat of a possible Iranian ground invasion in Iraqi Kurdistan is worrying and has led to the KRG calling for international intervention to prevent Iran’s attacks on Iraqi Kurdistan.  “Things cannot continue like this, these attacks have to be stopped: civilians are dying and our economy is taking a serious hit,” a KRG official said.

The Iranian Kurdish groups that Iran claims are terrorists are the Kurdistan Freedom Party (PAK), Komala and the Kurdish Democratic Party of Iran (PDKI). They have been the targets of IRGC’s missile and drone attacks on at least three separate occasions since the eruption of Iran’s nationwide protests on September 16.

The Iranian regime and its affiliated media outlets maintain a constant drumbeat of accusations against the fighters of these three groups ranging from their being the main instigators of the nationwide unrests (supported by “global arrogance,” meaning the US. UK, Saudi Arabia and Israel), to smuggling weapons to the protesters in a bid to foment an armed insurgency, to killing protesters in Kurdish-majority cities and villages in Iran and blaming it on Iran’s security forces. These bald allegations are supposed to be accepted on their face since the Mullahs have not provided a shred of evidence to back any of their accusations.

Across the border in Iraqi Kurdistan, the head of one of those groups considered to be terrorists by the IRGC has spoken to Majalla about the uprising, Kurdish aspirations and why Iran is targeting them. Commander General Hussein Yazdanpana is the leader of Kurdistan Freedom Party (PAK) whose fighters have been engaged in an armed struggle against the Iranian regime for four decades. Recently, on September 28, PAK was targeted by IRGC missiles in an unprecedented barrage against the group’s bases near Erbil, during which Gen. Yazdanpana lost 14 fighters, with another 58 injured. Another attack was to follow on November 22, about which Tasnim, a channel affiliated with the IRGC, reported that IRGC conducted strikes on the “Iraqi-based Komala and PDKI terrorist groups after the illegal entry by these groups’ armed teams into Iranian border cities.”

Gen. Yazdanpana said that Iran’s accusations are groundless and that no Kurdish fighters based in KRG region have intervened. He continued saying, “This is the people’s uprising. Let the people decide for themselves what they want to do. We do not want Tehran to find an excuse for more killings and more repression.” Mustafa Maroudi, a Senior PDKI official, agrees with Gen. Yazdanpana’s assertion that the Iranian regime is attacking their bases in an effort to represent the struggle against it as being led by external forces. “The regime wants to portray this as a military battle with us. However, we are aware that this would be in the interests of the regime, so we try to preclude that,” says Maroudi.

“The Kurdistan Regional Government would never make such a mistake,” says Yazdanpana

Gen. Yazdanpana explains that the Iranian regime has been overwhelmed by The Uprising, hence it continues with its fact-free accusations that ‘outside powers’ lay behind The Uprising. It is an attempt to divert the international community’s attention away from Iran’s domestic affairs and its people in revolt who just had enough of more than four decades of brutal oppression. Gen. Yazdanpana explains some of the reason to why the Iranian regime fears PAK is that “we fight for Kurdish rights and we also function as a source of information to alert people about the atrocities committed by the regime against the Kurdish people. We are an anti-terrorism and pro-feminist force in the region who supports the alliances between the Arab states against Iran.”

Gen. Yazdanpana continued to explain that PAK began as a result of the decades-long  Iranian occupation and oppression of the Kurds in Rojhelat or Eastern Kurdistan (Kurdish region in Iran). Gen. Yazdanpana says “I want my people to have the right to political sovereignty and self-determination. Our larger goal of an independent Kurdistan frightens the Iranian regime the most. I will do everything to establish a greater Kurdish state in the Middle East.” The General continues, “The Kurdish state will lead to the elimination of totalitarianism, and the rise of economic growth, trade and regional security in the region. I think a unified state of Kurdistan will solve the Kurdish issue, bring democracy and peace, and will lead to economic and commercial development.”

The latest news from Iran suggests a sharp intensification of regime tactics. Nearly 550 protesters have been killed, of which at least 70 were minors. Human right groups have reported that over 20,000 have been arrested and that the sham trials and public executions by hanging have started.

Four months in, the regime has catastrophically failed to quell the protests and so we have Ghaani’s visit to Iraq and his constantly threatening Iraqi and Kurdish officials with an Iranian ground military operation unless they remove the supposed threat of PAK, Komala and PDKI.

Majalla asks Gen. Yazdanpana whether KRI officials would bow to these pressures and abandon the Kurdish political groups. He confidently replies that “the Kurdistan Regional Government will never make such a mistake.” The General’s assertion that KRG will never make such a mistake is especially valid since betrayal has been a fixture of Kurdish life for over a century. The first betrayal came in 1920 when European powers promised statehood to the Kurds in the 1920 Treaty of Sevres, only to abandon this commitment in the 1923 Treaty of Lausanne.

The first ever Kurdish Republic was established by the Kurds of Iran, but collapsed in 1946 when the Soviet Union withdrew from Iran. The Republic was brutally crushed and many of its leaders were publically hanged by the Shah’s regime.

Kurdish communities across all four parts of Kurdistan (Syria, Iraq, Turkey and Iran) have been subjected to massacres and abandoned by the outside powers who refused to come to their aid. However, they were always able to rely on each other for help. For example, from early 1988 to 1991, the regime of Saddam Hussein led a brutal military campaign against the Kurds in Iraqi Kurdistan, resulting in hundreds of thousands being massacred. Many Kurds fled and sought refuge in Rojhelat, Iran’s Kurdish region, where “we were welcomed with open arms — Kurdish people in Iraq won’t turn their backs on them now,” the KRG official said.

Officials in the KRG are facing a challenging task ahead with balancing and maintaining a working relationship with Iran and its allies in the Iraqi government, who are under a great deal of pressure from Iran but are at the same time are helping the Kurds from Iran.

If anything, the events of October 2017 should be a reminder to the KRG and the international community that Iran’s accusation that Kurdish opposition groups like PAK are terrorists who are causing the strife in Iran is a lie. Iran’s endgame is not the elimination of PAK, Komala and PDKI but the total absorption of the Kurds as a people with their separate political and cultural rights as well as the crushing of the Iranian’s People Uprising.

On September 25, 2017, an independence referendum was held in the Kurdistan Region of Iraq, with an overwhelming 92.73% of votes cast in favor of independence. A month later, “on October 20, 2017, 5,000 Iranian Revolutionary Guards and 7,000 Hashdi Shaabi (an Iraqi proxy armed militia backed by Iran), commanded by General Qassem Soleimani, launched an offensive against the Erbil and Kurdistan Region,” said Gen. Yazdanpana. Here, PAK fighters and the Kurdistan Regional Government fought together, prevented and defeated the IRGC and their Iraqi proxies. “Tehran remembers its defeat in this war by us. They want to take revenge but we will not be destroyed by these attacks. Our roots are in East Kurdistan and in the hearts of our people. The units of our party and our army are in the cities and neighborhoods of our country, we are its offshoots. Even if they break the branches, what could they do with the roots?” 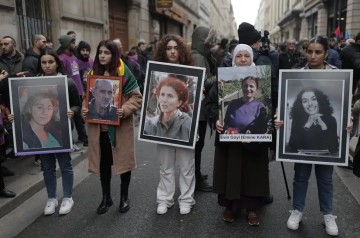 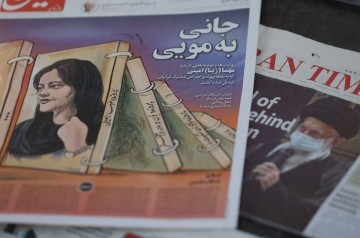 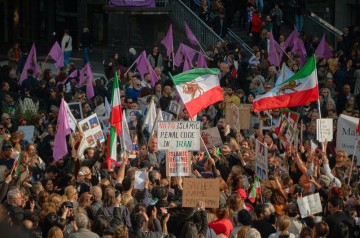