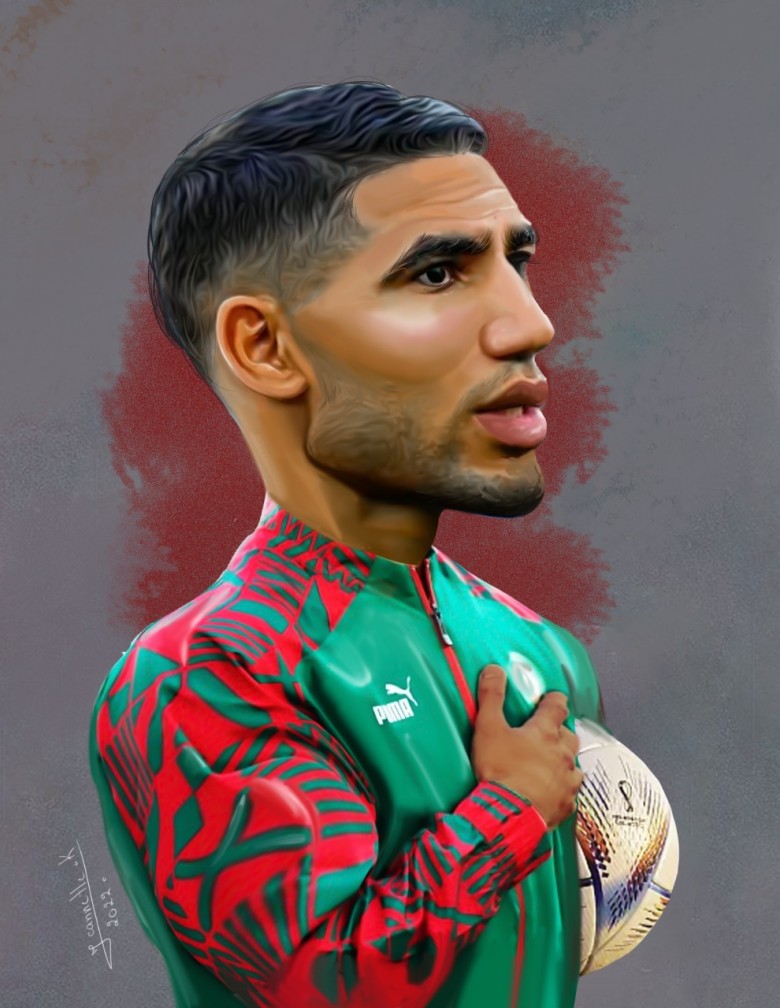 Morocco's resounding victory over Belgium in Sunday's FIFA World Cup match enthralled fans at Al Thumama stadium and around the world. The most emotional scenes in the stands occurred when Moroccan player Achraf Hakimi went over to kiss his mother.

Achraf Hakimi, visibly moved, was seen hugging his mother, Saida Mou, in the stands. Saida Mou is a mother who is credited with inspiring her son's success.

After the win, the PSG player, who previously played for Real Madrid and Inter Milan, dashed to the stands. He also gave his mother his match shirt. The emotional scenes' video and photos have gone viral on the internet. Hakimi himself posted pictures on Twitter.

It has a heartwarming backstory. Ashraf's mother, Saida Mou, used to clean houses in Spain in order to provide a better life for her son. Her husband worked as a vendor on the street.

"My mother was a house cleaner, and my father was a street vendor. We come from a low-income family that struggled to make ends meet. Today, I fight for them every day. They gave up their lives for me. They took many things away from my brothers in order for me to succeed," Achraf Hakimi once told Bundesliga.com.

Hakimi, who was born in Madrid and could have played for Spain, chose to represent Morocco because of his parents.

Hakimi represented Morocco at various youth levels before making his international debut in 2016 at the age of 17, having previously been capped by the nation’s  under-20 teams. He was named to Morocco's squads for the 2018 and 2022 FIFA World Cups, as well as the 2019 and 2021 Africa Cup of Nations.

Hakimi was a product of Real Madrid's youth system. He joined Real Madrid Castilla in 2016 and was promoted to the first team in 2017, where he played a few minutes. He was loaned out to Bundesliga club Borussia Dortmund for two years, winning the DFL-Supercup in 2019.

Following a successful loan with Dortmund, Hakimi joined Serie A side Inter Milan for a reported fee of €40 million, with his performances assisting the club in winning the league title, ending the club's eleven-year title drought. His performances piqued the interest of several European clubs, with Paris Saint-Germain reportedly paying €60 million to sign him in 2021.

Hakimi signed a five-year contract with Ligue 1 club Paris Saint-Germain (PSG) on July 6, 2021. The Guardian reported that PSG paid an initial €60 million transfer fee, which could rise €11 million in add-ons. On August 7, 2021, Hakimi made his Ligue 1 debut for PSG, playing the entire 90 minutes and scoring his first goal for the club against Troyes. On August 24, 2021, he received his first red card in European football in a 0-0 draw against Marseille. On September 22, 2021, Hakimi scored twice in a 2-1 victory over FC Metz to give his team a win and three points.

When he signed for Borussia Dortmund, Hakimi was profiled as a quick, dynamic, and powerful right-sided attacking full-back or wing-back who is tactically and technically adept and capable of playing long accurate passes from defense. He was trained as a winger, but due to his physical presence, he can also play as a defender. Several pundits consider him to be one of the best defenders and right-backs in the world.

Hakimi is married to Hiba Abouk, a Spanish actress of Libyan and Tunisian descent. The couple has two sons due in 2020 and 2022. He is an ardent Muslim.