Men hold up signs depicting the image of 22-year-old Mahsa Amini, who died while in the custody of Iranian authorities, during a demonstration denouncing her death by Iraqi and Iranian Kurds outside the UN offices in Arbil, the capital of Iraq's autonomous Kurdistan region, on September 24, 2022. (AFP)

The Iranian protests which have entered their third month are demonstrating the perseverance and bravery of the people from all classes and regions who united to rise up against the regime. Remarkably, the Islamic Republic is the key reason that triggered this revolutionary wave after its oppressive forces killed Jina (Mahsa) Amini who came from the Kurdish city of Saqqez on September 16. Women and men poured into streets side by side in this revolutionary movement in order to free their country.

The Iranian Islamic Revolutionary Guard Corps (IRGC) launched new operations against Iranian Kurdish groups that oppose the Islamic Republic from 20 to 22 November, in which they targeted the premises of the Democratic Party of Iranian Kurdistan (KDPI), and another one affiliated with Komala Party of Iranian Kurdistan in Iraqi Kurdistan, killing a number of civilians. Meanwhile, the regime’s oppressive forces opened fire against protesters in parts of the city of Sanandaj (the capital of Kurdistan province in Iran) and surrounded protesters in Sanandaj’s village of Dushan.

The regime’s missile attacks also intensified against Iraq’s Kurdistan, after KDPI had urged the public all over Iran to take to streets in support of the Kurds.

The revolutionaries’ protests, strikes and courage continued in Mahabad (West Azerbaijan), Bukan (West Azerbaijan), Sistan and Baluchestan (south west of the country), and Izeh (Ahvaz province – south west of the country) throughout the past two weeks, despite the severe crackdown and hundreds of killed, injured and detained people among protestors.

There were numerous calls for widespread and simultaneous protests and strikes all over the country on 15, 16 and 17 November, which attracted massive responses. Protestors in many countries, such as Izeh, were able to force the regime’s armed and oppressive forces to withdraw for limited periods. In some cities, citizens raised Iran’s flag without the logo of the Islamic Republic during the three days, which was vigorously praised by protestors.

The workers’ protest movement entered a new round of protests and strikes that have become more widespread. Workers halted operations in the 11th refinery in South Parse field, the petrochemicals factory in Masjed Soleyman, Bahman Motors, and Bahman Diesel for manufacturing trucks in Qazvin city. In addition, the truck drivers of Akbar Abad Shipping  stopped work. Striking workers are raising unionist demands and chanting in support of the intense popular protests.

While the ruling regime is continuing its detention campaign against university students and protestors, students carried on their protests and sit-ins at Noshirvani University in Babol (north), Razi University in Kermanshah (west), Tehran University’s Faculty of Applied Arts and Faculty of Psychology, and the Kurdistan University of Medical Sciences.

More concurrent mass protests were called for all over the country, as the Tehran Youth group and youth groups of another 19 cities issued a joint statement urging all people to join street protests and strikes from 19 to 24 November. The same statement called on all schools, universities, and markets, except for pharmacies and food stores, to join them while stressing that the industrial sector, particularly oil and petrochemicals should also participate in the public strikes.

Iranian authorities were largely criticized recently over its security forces’ excessive use of force and violence and firing on protestors and citizens in the revolting cities, including Kurdish regions.

The majority of Kurdish regions, such as Kermanshah, Sanandaj, Baneh, Saqqez, Kamyaran, Mariwan, Ravansar, Deh Kalan, Oshnavieh, Javanrud, Mahabad, and Bukan began public strikes on November 16. Eyewitnesses said that the Iranian authorities cut off electricity and internet in Mahabad, which had been briefly seized by the protestors on November 19. The IRGC entered in full gear to crackdown on protestors, committing a massacre against Mahabad citizens and using indiscriminate gunfire on people and houses.

Nevertheless, Mahabad protestors are organizing many initiatives to resume their protests and avoid sustaining too many casualties. They have put barricades in place and used pots to protect their heads from bullets fired by the oppressive forces. However, these protective methods have not prevented the killing and injury of a number of citizens.

Incidents were not different in Bukan on November 19, as hundreds of IRGC forces stormed the city’s neighborhoods chanting “Allahu Akbar” and “Haidar, Haidar” while relentlessly firing AK-47 and rifles at citizens. They brutally beat people and stormed houses to destroy them, in order to spread fear in residents. Live rounds were used by the IRGC on November 20 in Piranshahr, in West Azerbaijan Province, killing a number of citizens.

Student protests went on in many universities in support of Mahabad’s residents. Protesters in Sharif University in Tehran were violently attacked by the mobilization forces who threw stones at the protestors chanting “Haidar, Haidar.”

The crackdown troops went on to demolish cars, house gates and windows in a number of Saqqez neighborhoods, in Kurdistan. They also used excessive force and live rounds against protestors in Javanrud city, in Kermanshah.

The Kurdish Hengaw Organization for Human Rights published footage showing the authorities’ use of “Green Gas,” a chemical weapon, in Javanrud, where reports indicated that “protestors who inhaled the gas suffered from serious complications.”

On another side, while the Islamic Republic’s officials repeated that allegations that foreign enemies were behind the protests in Iran, the US Navy announced that investigators concluded that an Iranian Shahed 136 drone was used to attack the Liberian-flagged oil tanker Pacific Zircon on November 15 off Omani coast, and this tanker belonged to an Israeli billionaire. The Navy investigators said that the drone was of the same type Iran provided to Russia in its war on Ukraine.

Commenting on the popular uprising against his regime, the Supreme Guide Ali Khamenei described the protesting masses as “enemies” and “evil,” saying that “until this hour, the enemies have been defeated.”

Khamenei downplayed the importance of this revolutionary movement labelling it as “riots,” adding that the protestors were too weak to harm the regime. He went on to say that they were bribed to offend the Islamic Republic.

The Iranian judiciary summoned a number of sports figures and football professionals, including Yahya Golmohammadi, coach of Persepolis football team, over the protests. The regime forced former football professional Ali Karimi to leave the country. It also pressured Ali Daei, the Iranian football legend, to retire and threatened him following his support of the protests, while former Esteghlal goalkeeper Parviz Boroumand was detained. However, the Iranian national team announced that they are playing to please their people.

Published photos of some members of the national team rejoicing drew widespread anger among the Iranian public who considered the team inconsiderate to the developments at home, which include the oppression of protestors and torture in prisons. Adding to the public outrage against the team was that the jubilant photos were published on the same day ten-year-old Kian Pirfalak was killed by the regime forces in the Ahvaz city of Izeh.

During Iran’s games with England and the US, a number of the fans chanted against the national team’s players, “you have no honor” in reference to their actions which the protesting masses viewed as supportive of the regime. The outcry against the team increased as they were demanded by the many people not to sing the national anthem which was a dedication to the Islamic Republic. It was notable that some Iranian fans cheered for the English team during their game.

The protesters in Iran also celebrated the defeat of the Iranian team in their game with US in the Qatar World Cup. Meanwhile, Iranian news agencies published photos of Iranian girls without headscarves dancing and rejoicing in Tehran’s streets alongside the oppressive forces, after the Iranian team’s victory over Wales.

In a related development, the Iranian hacking group Black Reward announced that they hacked the IRGC-affiliated Fars News Agency, and said that the group was able to delete nearly 250 terabytes of data from all the servers and computers of the agency.

The masses taking part in the uprising against the Iranian Republic woke up to news of the crimes and violations committed by this regime against its people. Moreover, the news of the killing of children by the regime spread almost daily.

The disaster of the killing of Kian Pirfalak, a 10-year-old child, was one of these heinous crimes.

This child was shot dead by the regime as he was riding in a car with his father when he was shot in the chest in a city in the Ahvaz province.

The family refused to take him to the hospital and did not hand over the body for fear of its being kidnapped by the security forces, so they tried to keep the body in the house by freezing the body. The incident received sympathy from Iranian public opinion on a wide level.

The statements of Pirfalak's mother during her son's funeral angered the Iranian regime as she accused the authorities of killing the son.

Accordingly, the regime put pressure on her and forced her to make confessions under duress.

The US-based Human Rights Activists News Agency (HRANA) reported that 437 people were killed, including 55 security forces, during the ongoing protests as of November 22.

The judiciary announced the issuance of the death sentence against 6 of the detainees during the recent protests as of the time of writing this report.

Toomaj Salehi, a civil activist and rapper who supports the protests, was convicted of "enmity against God" and "corruption on earth," crimes that usually carry the maximum penalty in Iran.

It is noteworthy that Salehi's trial proceedings were not public and without the presence of his defense lawyer.

The killing of 51 children has been documented since the beginning of the protests.

CNN published an investigation into torture and physical attacks on protesters in Iran.

In its session on November 24, the United Nations Human Rights Council approved the formation of a fact-finding committee to investigate the crimes of the Iranian regime.

The wave of resignations continues among film actors and presenters of programs in the Iranian Radio and Television Corporation because they do not want to cooperate with this government institution that is under the authority of the Supreme Leader.

A number of presenters at the Radio and Television Corporation were laid off due to their support of the ongoing protests.

The resignations affected the sports sector in protest of the authorities’ brutal dealings with the protesters. Hamidreza Garshasbi, CEO of the Foolad Club, based in the city of Ahvaz, submitted his resignation.

Two boxers in the national youth team sought refuge in a European country and did not return to Iran.

Hussein Sauri, who was the head of the Boxing Federation, sought asylum in a European country because of his support for the popular protests.

However, there are many athletes, artists, actors, and program presenters who have chosen to side with the Islamic Republic in order to continue receiving benefits, rewards, and salaries.

It seems that the anger of the protesters, especially the youth, against the Islamic Republic has no end, as the burning of the headquarters of the religious seminaries and the “flying of the turban” in the cities indicate that the edifice of the institution of Shiite clerics has become very fragile in Iran. 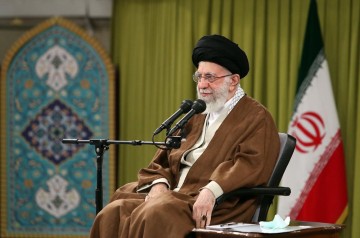 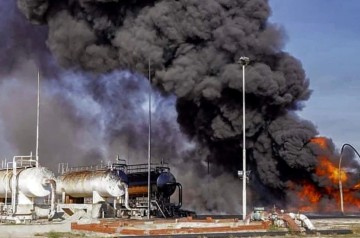 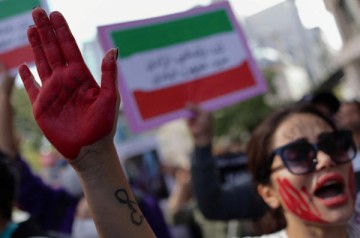