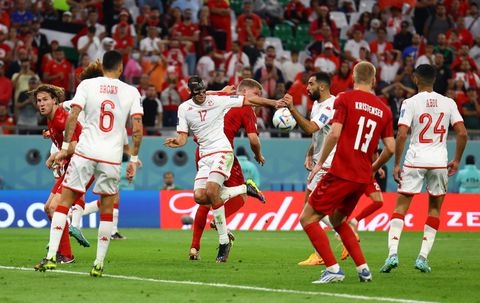 Substitute Andreas Cornelius hit the post and Denmark had a late penalty appeal turned down, while Tunisia wasted two clear chances in a 0-0 draw in their World Cup Group D opener at Education City Stadium on Tuesday.

Tunisia were roared on by their sizeable following in the 42,925 crowd, whose deafening whistles and roars gave energy to their side and helped secure what had seemed an unlikely point before kickoff, despite the fact they are unbeaten in nine of their last 10 internationals.

Denmark thought they should have had a penalty in stoppage time for handball that was checked at the VAR screen by referee Cesar Arturo Ramos, but he instead gave a free kick to Tunisia for a foul in the build-up.

"We played too nervously and too slow, and we didn't find ourselves in the first half," Denmark coach Kasper Hjulmand told DR. "There was a period when we got into it but we were never calm and comfortable, that came later in the game. There's no doubt we played under par.

"It (qualifying from the group) has become complicated but it's not over. We are underway with the tournament, but our heads would have been a little higher with a better result."

Tunisia played with a tempo they will find hard to maintain through the group stages, but were good value for their point and showed a resilience that will be pleasing for Coach Jalel Kadri.

Denmark would have hoped to create more chances, but their best came late in the second half when Cornelius only had to nod the ball over the line at the back post, but instead flicked it onto the woodwork.

Tunisia, who this week had spoken of their pride at qualifying for World Cup in an Arab country, were fired up from the first whistle, celebrating each tackle like a goal, and had two excellent chances to open the scoring.

The first fell to Denmark-based Issam Jebali when he found himself one-on-one with Kasper Schmeichel, but could not beat the Danish goalkeeper, who made an excellent, instinctive save.

The second saw Aissa Laidouni race clear from his own half, but as he approached the Denmark penalty area, he hesitated and opted for a pass that was not on rather than advancing another 10 yards and having an effort on goal.

In the context of the game, both might look at it as two points dropped, but Tunisia will certainly be the happier given the low level of expectation place on them – from outside their camp at least - going into the tournament.

They will face Australia next on Saturday, a game they will have targeted as their most winnable in the group, while Denmark meet defending champions France behind the points tally they would have set themselves at this stage.

There were other chances in the game as well. Right back Mohamed Drager saw his shot from 25-yards deflected off defender Andreas Christensen and go just wide with Schmeichel rooted to the spot.

Christian Eriksen was pulling the strings for the Danes but they struggled at times to get him onto the ball. When he did find a pocket of space just outside the Tunisian box, his shot was well saved by goalkeeper Aymen Dahmen.

"It was important to come into the game with a lot of determination," Laidouni said. "This is the World Cup, it's the most important competition in the world.

"The fans in Qatar are amazing and it was important to show them that we are determined and we want to give everything."

Hjulmand will be sweating on a knee injury to midfielder Thomas Delaney that forced him off in the first half. 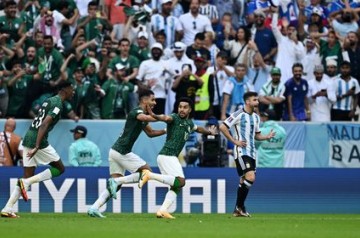 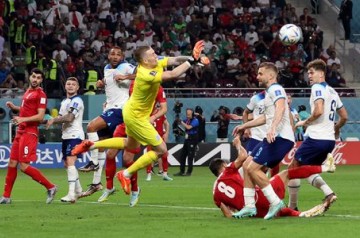