Household cash is near record levels in the United States, and consumers are using it to pack restaurants and airplanes and buy new cars. Jobs are there for the taking. Net worth is 30% higher than before the pandemic, more so for those in the bottom half.

And people have soured on President Joe Biden despite all of that.

Midterm elections on Tuesday could hamstring the Democratic president with a Republican-controlled Congress, and opinion polls and public sentiment surveys suggest that a gloomy mood around economic issues is pushing voters in that direction.

It is a fact of American politics that the party in the White House struggles in the congressional races held every two years between presidential contests.

It is a fact of this moment that there is a roaring, real-time dissonance between the president's 40% approval rating and broader economic conditions that are at worst mixed - with high inflation top of mind for many but also one of the strongest jobs markets in decades and a 3.7% unemployment rate. Overall, the economy is expected to grow in 2022, albeit slowly, after concerns earlier in the year that it had begun to contract.

Yet 56% of respondents in a recent Morning Consult poll gave the economy a failing grade, and an index of consumer confidence "has been lower in recent weeks than it was during the COVID-19 lockdown in 2020."

A CNN poll said a strong majority felt the country was in a recession, though by almost any standard it is not.

It is a frustrating moment for Democrats, who have won several marquee battles that delivered economic help to people, including a recent student debt relief package, as well as broader investments in infrastructure and regional industry.

"The American people are beginning to see the benefits of an economy that works for them," Biden said in a speech in New Mexico last week, trying to balance perceptions about where things stand.

He was speaking at a moment, however, when anxiety about what's ahead seems tangible due to inflation so high that it has offset wage gains for many, ever tighter Federal Reserve monetary policy, stock and housing market losses, and a real risk, according to many economists, that recession will set in next year.

Republicans have made the economy their No. 1 issue, and accuse Biden and Democrats of fueling inflation with major spending packages and then ignoring the economic plight of American families faced with soaring energy and food prices.

"President Biden is desperate to change the subject from inflation, crime, and open borders," Senate Republican leader Mitch McConnell tweeted last week, after Biden devoted a speech to the threats that may face U.S. democracy if some Republican candidates refuse to accept election losses. "Ask how the last two years have affected your family, and then get out and vote!"

There is more than a little debate about why prices are rising so fast, more than 8% annually as of September. Between former President Donald Trump and Biden about $5 trillion in pandemic aid has been pumped into the U.S. economy since March 2020 - one of the reasons bank accounts are still flush.

While that money still stokes demand, economists generally attribute much of the recent run-up in prices to outside supply shocks.

The causes of inflation, however, may not matter much to voters who have consistently punished politicians for price increases in day-to-day necessities, particularly food and gas. Food prices were rising at an 11% annual rate as of September, the fastest monthly pace since February 1979, when Jimmy Carter was in the White House. After hitting $5 a gallon last summer, the average price of unleaded gasoline in the country had fallen to $3.70 as of last week - but it is still sharply higher than the $2.53 motorists paid in the week before Biden's inauguration in January 2021.

Still, key parts of the economy are doing as well as they ever have.

The unemployment rate has averaged 3.6% since March - better than before the 2018 midterm elections under Trump, and unrivaled really since the 1966 midterm elections. Until recently wages for lower-paid workers were rising faster than inflation, and if anything the Biden presidency has been a time of perhaps unrivaled worker leverage, characterized by job hopping and openings far in excess of the numbers seeking work.

BEHAVING DIFFERENTLY? NOT YET

What it also has been is turbulent, reflecting the United States' complicated response to the pandemic and a cluster of other dilemmas - a "polycrisis," as some academics call it that includes the outbreak of war in Europe and China's still-ongoing "zero-COVID" lockdown.

Biden's approval rating was high early in his term, with stimulus checks still rolling out, and child tax credits and unemployment benefits helping many families.

That's all in the past.

Small businesses, for example, were among the chief beneficiaries of government spending during the pandemic, but they now favor Republican control of Congress even though only a third identify as members of the party, according to a recent poll that small business group Alignable did of its members.

Among their top concerns, more than half cited the rising cost of credit, pushed higher by the U.S. central bank in a dynamic that also harkens back to the presidency of Carter, an incumbent saddled with inflation who lost reelection under a regime in which interest rates were climbing sharply.

According to a recent Reuters-Ipsos poll, people are not yet changing day-to-day lifestyles much in response to inflation or the Fed, which has raised rates by 3.75 percentage points this year. One of the benefits of the big cash pile retained from the pandemic is people can keep spending despite higher prices.

Offered a list of behavioral changes in response to inflation, from lowering savings rates to canceling vacations or buying cheaper brands, 80% of respondents in that poll replied "none of the above."

But a third of both Democrats and Republicans said they had delayed a "home, office or other purchase" because of higher rates - decisions that can sting as families plan for the years ahead. The average rate on a 30-year fixed home mortgage recently hit 7% for the first time in 20 years, a shock to younger, first-time homebuyers in particular.

Perhaps as important to politics, there is grave uncertainty about the future, something that appears to be behind the dive in surveys assessing consumer confidence.

Confidence has fallen despite the general rise in wealth.

Since the start of the pandemic, including Trump's final year in office and Biden's first two, households have added $32 trillion to their wealth, a roughly 30% increase, Fed data shows. The holdings of the bottom 50% more than doubled.

But for the last year the growth has stalled, and heading into the elections on Tuesday there seems little optimism left.

In the Reuters-Ipsos poll, a strong majority that included 70% of Democrats and 77% of Republicans said they were either no better or worse off financially than they were a year ago.

The gap between public attitudes about the economy and the facts on the ground, "is very wide," said John Leer, chief economist at Morning Consult. But "there is also a wide disconnect in the underlying data. We are getting strong job growth. GDP growth. But everything is flashing red." 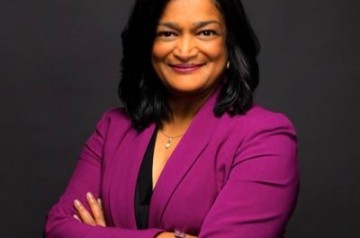 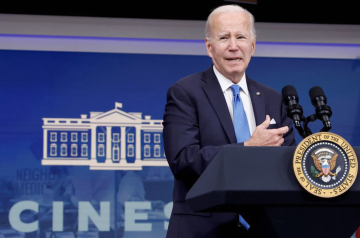 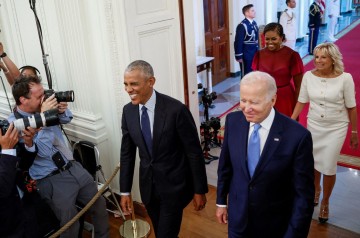 Democrats Turn to Obama for Midterm Miracle, or at Least to Stem the Bleeding