How ‘Women, Life, Freedom’ Unified All the People of Iran 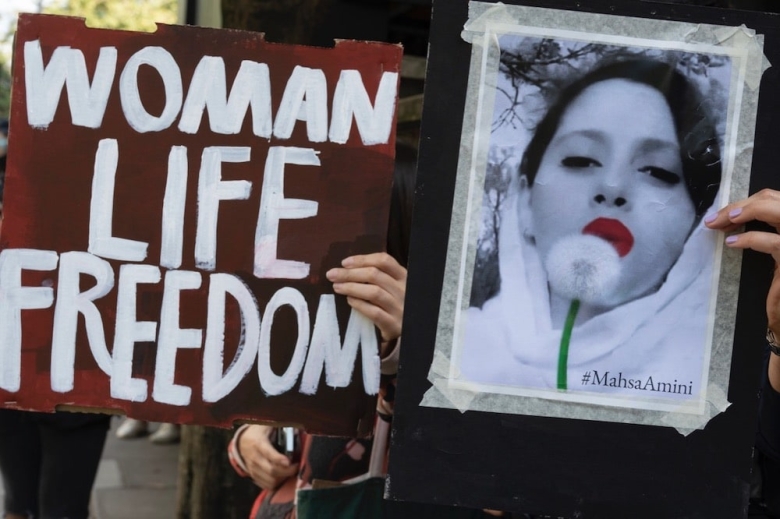 People demonstrate opposite the Embassy of Iran in Kensington to protest the death of Mahsa Amini, the 22-year old Kurdish woman who died while in police custody in Iran/Jenny Mathews via Getty Images

Iran enters its second month of daily nationwide demonstrations in the wake of the death of the 22-year- old Kurdish woman Jina Amini after being detained by Iran’s morality police for supposedly breaching the country’s mandatory headscarf law.

The protest movement in Iran is growing in terms of its intensity and its expansion. Hundreds of thousands of Iranians from all walks of life are chanting “Death to the Dictators” and “Women, Life, Freedom.” The latter emerged from the Kurdish liberation movement and was adopted by the Iranian protest movement. In Iran, the slogan was first chanted at Amini’s funeral on Sept. 17 in the Kurdish town of Saqqez, and since then has been recognized globally as the banner of Iran’s Uprising.

However, this feminist slogan pre-dates the current events unfolding in Iran. In April 2013, in Turkey, during the congress of women’s branch of Peace and Democracy Party, a Kurdish party with historical links to the Kurdistan Workers’ Party (PKK), the slogan was echoed during the conference.

Without a doubt, the Kurds have been the most vocal and continuously opposed to the Iran-Mullah regime and towards the Iranian national identity which the state has tried to impose on them for decades. More than any other Iranian citizens they have endured a systemic state oppression, resulting in the death of more than 10,000 Kurdish men and women and other serious human right abuses such as torture, long-term imprisonment, executions of Kurdish intellectuals and suppression of cultural and human rights activities. In defiance of all of the persecution, Kurdish civil society did not relinquish its national consciousness. In Kurdish towns and villages Kurds publicly displayed Kurdish flags, playing banned Kurdish music and songs about murdered political Kurdish leaders, and celebrating Kurdish New Year, Newroz.

There are several features making this uprising unique in comparison to previous ones. It is broad-based with all layers of society joining in, including ethnic and religious minorities. The mood is revolutionary – people are not calling for reforms but rather regime change. The protesters are also braver and bolder and attacking the very symbols of the Islamic regime. It is not insignificant that it is the Kurdish-DNA that runs deeply, from the death of Amini, to the protests spiralling out from the Kurdish region, to the rest of Iran and finally to an old Kurdish slogan that unifies the current protest movement in Iran.

Who thought that a Kurdish mantra associated with Abdullah Öcalan and the PKK would become the rallying cry of the Iranian Uprising? Jin, Jîyan, Azadî means “Women, Life, Freedom.” The word Jin in Kurdish means “women” and comes from the root Jiyan meaning “life.”

The Kurdish people are proud that Jin Jiyan Azadi serves as a starting point and a catalyst for the protests against fascist government in Tehran and shows Kurdish unity with the Persian people as well as the other minority ethnic groups in Iran.  The people of Iran should stand undivided against the clerical cabal that is suppressing them.

For decades there has been a debate among Kurds about the role of women in Kurdish society and in the struggle for independence. “Women, Life, Freedom” emphasizes the women’s liberation character and gender-equality which emerged as form of feminism in Kurdish heritage. Recently, this was further developed by Öcalan, the imprisoned Kurdish leader and founder of Kurdistan Workers Party (PKK), a fierce opponent of the medieval patriarchy and an advocate for women’s rights.

The PKK’s Women Liberation Division states that its platform is built on the principle that without the freedom of women within society and without a real consciousness surrounding women no society can call itself free. For years the slogan was in used by members of the Kurdish women's movement, a part of the Kurdish freedom movement which was founded on grassroots activism in response to persecution of Kurds by the regimes of Iran, Iraq, Turkey and Syria.

Öcalan has written extensively on the topic of equality and women’s rights. In his book “Liberating Life: Women’s Revolution” (2013), Öcalan writes: “The extent to which society can be thoroughly transformed is determined by the extent of the transformation attained by women. Similarly, the level of woman’s freedom and equality determines the freedom and equality of all sections of society (…) for a democratic nation, woman’s freedom is of great importance too, as liberated woman constitutes liberated society. Liberated society in turn constitutes democratic nation. Moreover, the need to reverse the role of men is of revolutionary importance.”  For Öcalan “the level of woman’s freedom determines the level of freedom in society at large.”

In practical terms, Öcalan’s political theories specifically on the role of women have been the cornerstone of the ideology of the Democratic Union Party (PYD) and People’s Protection Units (YPG), in which women made up 40% of the Kurdish Peshmerga fighting the Islamic State of Iraq and Levant (ISIL).  In Rojava, the Kurdish de facto autonomous region in northern Syria, a social revolution took place in a normally traditional conservative and patriarchal Middle East. The phenomena of female fighters exist in all four parts of Kurdistan (Iran, Syria, Iraq and Turkey).

Majalla approached Kurdistan Freedom Party (PAK) to comment on the use of the slogan by Iran’s protest movement. An official told us that “The Jin, Jiyan, Azadi slogan was created for something totally different than what’s going on now.”  The official continued saying, “We believe such slogans may narrow the protestor’s belief that they could change something (…). The matter is bigger than only Jin Jiyan Azadi. As words and as a term we have no problem with using it and we do use it in fact to support some but not all of the goals of our protests.”

The official continued, “PAK serves all Rojhalat in the previous and current situations. PAK is a real supporter of women in Rojhalat. We have a special unit of Peshmerga forces that is made of strong women.” The official told Majalla that since the recent unrest started, more people are joining PAK. The new recruits  feel that, “PAK is the place where they can breathe freely.”

According to rights groups, at least 200 people including more than 20 minors have been killed and thousands have been arrested. Hengaw – an Iran based Human Rights Organisation reported that the worst atrocities are committed in the Kurdish and Baluchi provinces where at least 90 deaths have been reported in Zahedan, Baluchistan.

Rights groups have reported that Sanandaj has become the latest killing zone amid worsening state violence. They continue saying that Iran’s security forces are shooting directly at protesters and using tear gas in the Kurdish cities of Sanandaj and in Amini’s hometown of Saqqez.

Hengaw reports that more than 100 military vehicles full of Special Forces are moving from Hamedan to Sanandaj. There are fears that the Iranian regime is preparing for a ground assault on the Kurdish region. A Hengaw official said, “given the recent military activity and the movement of advanced artillery close to the border, there is a possibility of a ground invasion with air support targeting the headquarters and camps of the Iranian Kurdish opposition parties.”

Hengaw provided Majalla with a detailed report listing  the names of those who have been killed in the Kurdish region. The following are the figures for the past three days of protests (up to Oct. 11): “at least five civilians were killed, two detainees were tortured and murdered, and over 400 people were injured as a result of machine gun fire and other violence perpetrated by government forces during protests in Kurdistan throughout the past three days.”

Staggering Numbers in the Kurdish Region

The total death toll for the Kurdish region currently is 32, with1541 injured and over 2500 Kurdish protesters been arrested. The Hengaw official continues: “It should be noted that many of the detainees were severely tortured and at least two of them died under torture in the cities of Urmia and Saqqez.”  Most of the victims are from Sanandaj, Saqqez, Mahabad and Kermanshah.

Hengaw told Majalla, that Dr. Ramin Neshasteh from Saqqez, who was treating injured people, was detained and taken to an unknown place by the Iranian security forces on Oct. 10.

The Center for Human Rights in Iran (CHRI) said in a statement on Oct. 11: “The ruthless killings of civilians by security forces in Kurdistan Province, on the heels of the massacre in Baluchistan Province, are likely preludes to severe state violence to come,” said CHRI Executive Director Hadi Ghaemi.

The official from PAK tells Majalla, that the death toll is much higher, as “Some of the martyrs are buried secretly inside gardens of their houses so Iran’s Revolutionary Guards do not take the bodies or do not kidnap the family of the victims.”

While university students have played a major role in the protests with dozens of universities on strike, a new battleground has opened.  Workers at Abadan in Khuzestan Province and Kangan oil refineries and the Bushehr Petrochemical Project have also joined in the protest movement.

On October 10, the following statement was posted on the Contractual Oil Workers Protest Organizing Council channel on Telegram: “To [all] our colleagues in oil, gas and petrochemical projects, in all refineries and petrochemicals, in the oil platforms as well as the drilling sites – we declare that now is the time for widespread protests and to prepare ourselves for nationwide and backbreaking strikes,” read the statement.

At least 200 people, including 20 children, have been killed, thousands injured, and thousands have been arrested by the security forces. Nevertheless, the Iranian regime is in total denial and blaming the protests on Iran’s foreign enemies ranging from the US and Israel to Saudi Arabia and armed Iranian Kurdish dissidents living in Iraqi Kurdistan.

In 1979, precisely, 43 years ago, a combination of mass protests and strikes by oil workers and bazaar merchants brought down the rule of the Shah. However, the chance of success for the current revolution is quite slim, since the regime is determined to stay in power at any cost. The Iranian regime’s loyal elite forces like the Revolutionary Guards, so far have been relatively restrained, but they could be mobilized quickly to unleash a brutal crackdown. Kasra Aarabi, the Iran program leader at the Tony Blair Institute for Global Change, said that if the protests persist, the regime will use “unrestrained violence against unarmed civilians to quash the protests this time around.”

Aarabi continued saying “of course, no one can predict when this moment will happen [referring to the fall of the regime], it could be weeks, months or even years (…) But the Iranian people have made up their mind.” 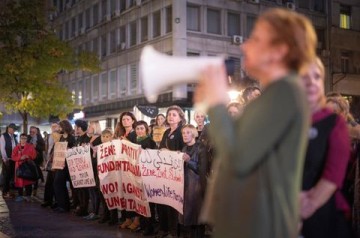 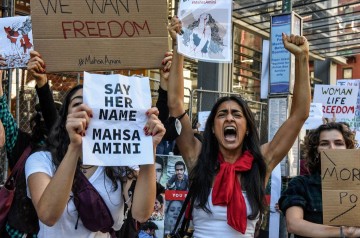 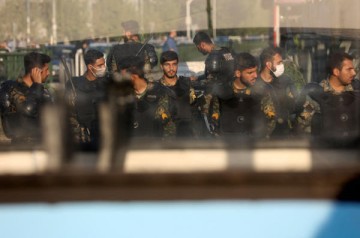 Iranians Keep Up the Heat on Leaders with Protests, Strikes