King Charles Heads to N.Ireland, Queen's Coffin To Be Flown To London 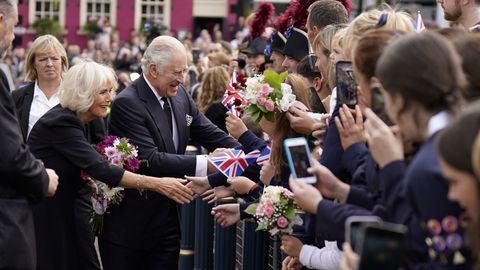 King Charles heads to Northern Ireland on Tuesday, leading the mourning for Queen Elizabeth in the four parts of the United Kingdom before his mother's coffin is flown to London ahead of four days of lying in state.

After a silent vigil attended by Charles, his sister Anne and brothers Andrew and Edward at St Giles' Cathedral in the Scottish capital Edinburgh on Monday, people queued overnight to file past the queen's coffin, some with sleeping children.

Charles, 73, is traveling to the four parts of the United Kingdom before the queen's funeral on Sept. 19. In Northern Ireland, people started to line the streets at Hillsborough Castle, the monarch's official residence, ahead of his visit.

"We came out to pay our respects to Queen Elizabeth because she was a fantastic queen and very loyal to Northern Ireland and we wanted to be here to welcome the new king," said Heather Paul, 61, holding flowers and a small Union Flag.

"We think Charles will be a fantastic king, he's had a very long apprenticeship and I think he will follow on in the queen's footsteps," said Paul, who traveled 50 miles (80 km) to pay her respects.

He is due to arrive later on Tuesday from Scotland, where he followed the queen's coffin up Edinburgh's Royal Mile and was joined by his siblings for a 10-minute vigil at St Giles' Cathedral. They stood, heads bowed, at the four sides of the coffin while members of the public filed past.

People queued overnight to pay their respects, many wearing winter jackets, scarves, and woollen hats to keep out the cold.

"We were desperate to be here to show our respects," said Will Brehme, an engineer from Edinburgh, who arrived in the early hours of the morning with his partner and 20-month-old daughter sleeping in a baby carrier.

"It is a moment that will live with us forever. When you think that she worked all of her life for us it is the least we could do."

Elizabeth died on Thursday in her holiday home at Balmoral Castle, in the Scottish Highlands, at the age of 96 after a 70-year reign, plunging the nation into mourning.

Charles, who automatically became king of the United Kingdom and 14 other realms including Australia, Canada, and Jamaica, will be joined by new Prime Minister Liz Truss.

In Belfast, he will meet senior politicians and faith leaders and attend a service at the city's St Anne's Cathedral before returning to London.

"For Northern Ireland, she meant a ... lot here. As you know we are quite a split country, unfortunately, but the queen always stood by us. She never put a foot wrong," said Joey McPolin, 77, from Dramore.

"I think to be fair, our friends here in Northern Ireland, we all want to live together, we really do. I think people with different religions recognize the wonderful job she did. I really hope we all go forward and support our king."

A potent symbol of the union, the queen in her later years became a major force for reconciliation with its Irish nationalist foes, with her state visit to Ireland in 2011 the first by a monarch in almost a century of independence.

Charles has also spoken about the murder of his great uncle Lord Mountbatten, to whom he was very close, in Ireland by the Irish Republican Army (IRA) in 1979, saying the death had given him a profound understanding of the agonies borne by so many people in the country.

"Don't forget, the royal family themselves have been deeply impacted by violence in Northern Ireland in terms of their own family and loss," said Irish Foreign Minister Simon Coveney.

"I expect that he will want to see his role being part of protecting and building and strengthening the relationship between Britain and Ireland, given the complexity of our past and given the polarization of political opinion, particularly in Northern Ireland," he told BBC radio.

In Scotland, tens of thousands of mourners turned out to observe the processions along the historic Royal Mile. In London, large crowds of people have left flowers and messages in the grounds of royal parks.

The queen's coffin will leave Scotland for the first time since her death when it is flown to London in the early evening and then driven to Buckingham Palace.

On Wednesday, it will be taken on a gun carriage as part of a grand military procession to Westminster Hall where a period of lying in state will begin until Sept. 19.

Members of the public will be allowed to process past the coffin, which will be covered by the Royal Standard flag with the sovereign's Orb and Sceptre placed on top, for 24 hours a day until the morning of the funeral.

The death of Britain's longest-reigning monarch has drawn tears and warm tributes, not just from the queen's own close family and across Britain, but also from around the globe - a reflection of her presence on the world stage for seven decades.

King Charles to Join Procession of Queen's Coffin in Scotland