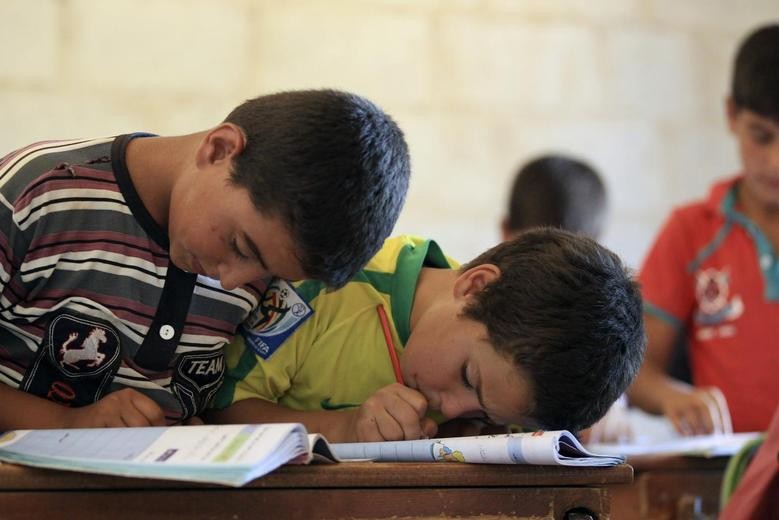 Children attend a class during the first day of school in Idlib countryside September 11, 2014. REUTERS/Khalil Ashawi

With the advent of September of each year, Syrian families face a new crisis in a country that has been exhausted by a war which followed popular protests that erupted across the country in mid-March of 2011. What is the crisis that severely burdens Syrian families which can barely secure a living?

Schools and educational institutions opened in September 4, which means that Syrian families with limited income are facing a new crisis of securing school supplies such as clothes, stationery and other necessities that are required for their children to attend schools in various regions, whether in elementary, preparatory or secondary stages.

The father of two Syrian children who live with their family in the city of Damascus revealed that "the recent decline of the Syrian pound against foreign currencies has led to an increase in the prices of various commodities in the city, but this is a problem that we can overcome, especially since the purchase of school clothes and stationery will often be done only once during the school year."

He stressed to Majalla that "the biggest challenge for me lies in securing transportation so that my children can reach their school."

He also said: "The cost of each of my children's transport to school is 75,000 Syrian pounds per month, and therefore I need 150,000 pounds per month to secure transportation for my child, which is equivalent to about 35 dollars today."

He added: "The amount of $35 per month does not seem like a large amount, but in Syria we cannot get it, as it is more than my salary in fact, and for this reason I depend on my brother who has lived in Bulgaria for years and who takes care of the costs of my child's transportation, while I am content with providing clothes and stationery for them.

This Syrian father is one of thousands who can hardly pay for his children’s schooling. The Syrian war, which entered its second decade a few months ago, has led to high rates of inflation and a lack of job opportunities in the country.

In addition, immigration has negatively affected schools and the educational process causing a shortage of teaching staff.

The father of the two children also said that "Syrian government schools were much better than private schools, whose number was very limited in the period before the Syrian war, but the military operations that led to the large displacement and refugees inside and outside the country, ultimately contributed to the decline of education against the background of a lack of staff and the destruction that occurred in educational facilities.”

He added: "These public schools, I mean, have become an option for every family that cannot afford the expenses of enrolling their children in private schools. Thus, public schools have become an imperative option but they do not provide the required educational service, especially in the field of languages."

In addition to the major repercussions of the war on educational facilities, whether in terms of the destruction they sustained or the migration of their staff, the outbreak of the coronavirus pandemic and the conditions that accompanied it nearly two years ago were additional factors for the further decline in public schools in Syria.

The father of the two children and the mother of another child confirmed to Majalla that, “the closure of schools and remote education has led to a decline in the level of education in Syrian schools.

Although the Ministry of Health has canceled all restrictions of the coronavirus pandemic, the “sick leaves” requested by the teaching staff have so far led to a further decline in the capabilities of public schools, as schoolteachers are requesting sick leaves to take advantage of the time off for the practice of other work such as private tutoring at homes and institutes, or to join another job in the private sector, given their low wages.

In addition to the lack of teaching staff, the students’ families stress that the educational facilities are not well-equipped, as they are sometimes partially destroyed and do not have the requirements of adequate ventilation and air conditioning, which leads to the spread of diseases among students, especially in the primary stage.

According to several families that Majalla spoke to, the lack of teaching staff led to an increase in the number of students per class to more than 50 students in some public schools. This is another factor that contribute to the decline of the educational service provided to their children.

These families also complained about the lack of scientific laboratories in government schools and the difficulty of accessing the Internet and using computers, not to mention the power outages in those schools. Other families are encouraged to enroll their children in private schools.

Majalla contacted more than one family who registered their children in private schools. They confirmed that the registration fee for each student is no less than one million Syrian pounds (equivalent to about 220 US dollars).

The father of a child who joined a private school in Homs two years ago said that "the fees of any private school are not less than $200, even if it is in a densely-populated area," noting that "private schools are the best option because of the lack of teaching staff and other problems that public schools suffer from."

He added that "the future of my child is closely related to his level of education, especially in learning foreign languages. This means that he must be registered in a private school in order to get a good education."

He added: "The school fees, which amount to more than $200, do not include the cost of transportation, which is about $40 per month."

He also stressed that "my child was studying in a public school, but the decline in its educational services forced me to enroll him in a private school."

He added: "It is true that government schools do not ask for registration fees like private schools and what I pay today in exchange for enrolling my son in a private school means more financial burdens for me."

He explained that "any student, even if he is in a private school, may need a private teacher, but the difference between public and private schools is that the student in private schools will not need a tutor in all subjects, while in public schools, sometimes there are no teachers throughout the year."

Majalla obtained information that the reliance on public schools in Syria has reached its lowest levels.

Private tutoring in homes or institutes for students in public schools appears to be “necessary,” especially in the transitional phases against the background of the lack of teaching staff, and it is a way for teachers whose salaries do not exceed 117,000 Syrian pounds (about 30 US dollars) to earn additional income.

The father of two children, one of whom is in the third preparatory and the other in the third secondary, said that “the low wages of teachers made most of them deal with schools as a means to secure clients in private lessons to obtain additional income.” On the other side, several teachers to whom Majalla spoke denied this and said that “private tutoring in the two preparatory and secondary stages was popular in Syria before the Syrian war, and this means continuing an old mechanism that helps students achieve success.”

Another teacher said: "My salary is not enough to secure transportation to get to my job, so I had to work as a private tutor and spend a long time at work."

He added to Majalla: "The option of private tutoring was a necessity for me, after my monthly salary became insufficient to secure my living needs for a week."

He further explained: "My monthly salary, in addition to what I get from private lessons, hardly provides me with the minimum standard of living," calling on the Ministry of Education to raise the salaries of teachers and workers in educational institutions to limit the deterioration of the education sector in the country.

While some families complain about education in public schools and the difficulties in securing school supplies for their children, such as clothes, stationery and transportation, other families have forced their children to drop out of school to help them secure their daily bread.

The number of those children who did not attend school reached about half a million children, about 40% of whom are girls, according to statistics issued by the United Nations Children's Fund (UNICEF). The number increased significantly after the outbreak of the coronavirus pandemic, according to what a number of school administrators reported to Majalla. They are located in the cities of Damascus and Aleppo.

According to Syrian government sources, the percentage of children who did not attend school in some governorates of the country exceeded 12 percent. 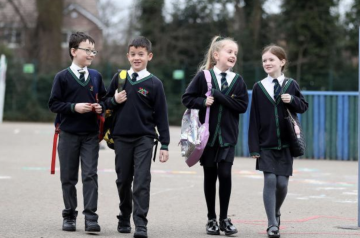 First Day back to School 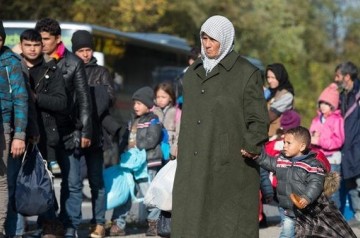