Syrian Refugees Tell Their Stories of Suffering to Majalla 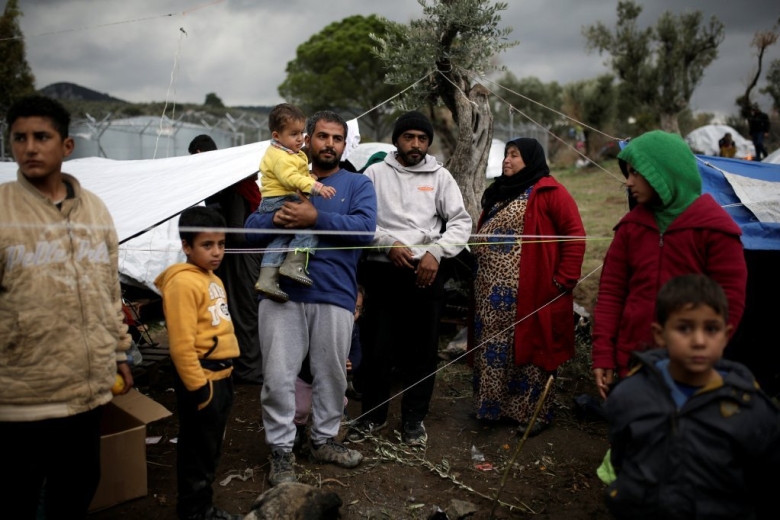 A Syrian family at Moria camp in Greece on November 30, 2017 © REUTERS/Alkis Konstantinidis)

With the arrival of more than a million Syrian refugees to European countries in the past years, as a result of the war that Syria has been witnessing since 2011, families are experiencing new suffering that worries thousands of them and is based on the issue of reunification between members of the same family.

This happens especially with those who arrived alone without their families in the countries they chose to flee to reside there, so what are the difficulties these people face when trying to ask members of their families to join them?

The difficulties of applying for family unification vary according to the kinship relationship between the applicant and the person who wishes to join the Syrian refugee who has arrived in a European country the country of asylum.

However, he is forced to wait until he obtains the right of asylum and secures a home for his family members residing outside Europe before he initiates an official request for family unification from the local authorities.

In this context, three young Syrians living in France spoke about their difficult experience waiting for their wives and children and unanimously agreed that “the unification procedures seem complicated in this country, as our wives and children cannot catch up with us before completing our asylum papers and then applying for a residency card.

“There also is a need to secure adequate housing for all family members, and then the second stage of suffering begins when we start preparing the papers required to complete the unification of procedures at the Immigration Department in our places of residence.”

This was confirmed by an employee in the Immigration Department in the province of Marseille to Majalla, explaining that the French law does not give the right to a married refugee to request family unification and receive his family members as refugees only after he himself obtains refugee status and subsequently obtains a French residency card. Requirements also include the provision of adequate housing sufficient for all individuals, including wife and children.

A Syrian refugee complained about the long period needed to study the asylum application and obtain a final decision on it and then obtain a residency card, revealing that he arrived in Paris at the beginning of 2020, but so far, he had not applied for a residency card because of the time taken to process the request. He included his family consisting of his wife and two young children.

He added in an interview with Majalla: "It was expected that the residency card would be in my possession at the beginning of the year 2021, according to the expected period during which asylum applications are studied as usual, but the outbreak of the coronavirus and the closure of state departments for a long period of time prevented this, and so far, I have not submitted an application to obtain a residency card.

He continued, "The interview that I should have had with the immigration department in Paris was delayed for more than a year. I did the interview in April of the year 2021, and then I got asylum in December of last year, but I did not get a birth certificate so that I could apply for residency, after which I could start my family unification process.”

This Syrian refugee is one of the thousands of Syrian refugees who have arrived in France in recent years, and are waiting for their family members to join them after they were able to reach the French territories on refugee visas or by sea illegally.

An employee from French non-profit organization La Cimade told Majalla that "the issue of family reunification is already taking a long time, especially after the outbreak of the coronavirus and the closure that France witnessed as a result more than once, which led to the accumulation of these files."

The employee, who works in the association concerned with helping refugees and immigrants, stressed that "the file for family reunification in the best cases takes about a year and a half if the person granted asylum is married before being granted asylum."

He pointed out that "the refugee at the present time waits for about two and a half years until he obtains the right to asylum and then residence, and then he needs about a year and a half of procedures for his wife or children to join him, and therefore with his arrival in France he must wait for about 3 years at least to meet his family."

He added, "These procedures seem easier compared to the refugee who wants to associate with a woman residing in another country. For example, if a Syrian refugee intends to marry a Syrian girl residing in her country or in Syria's neighbouring countries, then the conditions are more difficult”.

He stressed that "every refugee who intends to be associated with a woman in Syria or in neighbouring countries, he must first obtain a document confirming his celibacy from the Asylum Department in Paris, and then he must travel to a third country in which to marry, and then return to France to duly translate the marriage contract and send it to the Asylum Department to register his marriage in France”.

He pointed out that "the registration of marriage takes about a year, after which the refugee can bring his partner according to a request for family unification, but he must provide enough housing for two people and have enough work to live with his wife, and in the absence of these conditions, his request will be rejected."

Another Syrian refugee told Majalla, "I got married in Erbil, the capital of the Kurdistan region of Iraq, and I was finally able to register my marriage in France, but I was not able to meet the other required conditions, such as the condition of having enough work for two people."

He added, "My request was rejected twice because it was difficult for me to get enough income with my wife according to French standards, and thus we remained suspended between two countries. I am here and my wife is in another place."

The conditions for family unification do not differ between France and the rest of the European countries, but the time period during which applications are processed varies not only from one country to another, but from one province to another.

A Syrian woman residing in the Jordanian capital of Amman, said, "My husband has been residing in France for about 3 years, and so far, I have not been able to join him. We got married about one year before he traveled."

She told Majalla, "My husband has not yet obtained a birth certificate after he was granted refugee status, so we have to wait for about another year before I can join him."

Most European countries stipulate the necessity of adequate housing for all family members, but they tolerate such conditions and the necessity of having a job that provides the income required for the family’s livelihood if the applicant for family unification has married long before his arrival to the European country and obtaining asylum there.

But it stipulates the necessity of having a suitable job and housing for every refugee who got married after arriving in Europe.

According to another employee of the French association La Cimade, a refugee married to a woman residing outside France can apply to the authorities to join him, but the authorities cannot tolerate his application when there is insufficient income for their livelihood and an adequate housing, noting that these two conditions apply in all European countries and for all refugees, no matter what countries they come from.

The employee told Majalla that refugees asked for their help to overcome these two conditions, but this matter cannot be bypassed, as the law is clear as he put it, and it cannot be bypassed or its provisions can be ignored.

Although these two conditions hindered family unification, the whole case ends after the refugee obtains a job that provides the cost of living for two or more people, according to the number of his family members.

Fears of Consummating Marriage for Purpose of Visa

Refugees have already exceeded these two conditions after obtaining work with a suitable income, but this did not help in processing the applications for their wives to join them in a shorter time.

A Syrian woman who got married three years ago in Istanbul to a Syrian refugee residing in Germany said that "my husband fulfilled all the conditions required of him after we got married, but the German consulate in Istanbul has not yet set a date for my interview."

She told Majalla, "The appointments are getting late at the consulate, even though the conditions that accompanied the outbreak of the coronavirus no longer exist."

The condition of this woman who is waiting for an interview at the German consulate in Turkey may seem much better than other women who were refused visas even though their husbands fulfilled all the required conditions.

A Syrian woman said that the German consulate refused to grant her a travel visa to join her husband.

“The consulate refused to grant me the visa because it did not find evidence of my association with my husband, such as pictures of the wedding ceremony. Therefore, the refusal came after the consulate's suspicions that the marriage took place on paper only with the aim of obtaining the visa only and moving to Germany".

She added, "I have lodged an objection with the consulate and at the moment I am waiting for its response."

The mechanism of work of European embassies and consulates in dealing with family unification files differs between countries, and the conditions for entering those countries, which sometimes seem difficult, force women who want to join their husbands residing in Europe to wait for a longer time.

Lebanon, Turkey, Jordan and the Kurdistan region of Iraq impose multiple and different conditions for entering their territories to conduct interviews at foreign embassies and consulates.

Majalla spoke to an employee in a travel office in the Syrian capital of Damascus, who confirmed that most of those who want to join their families in Europe are trying to get appointments at European consulates in Erbil, due to the few requests for family unification that they receive compared to larger requests that reach European consulates in Turkey and Lebanon.

According to the employee, requests in consulates that receive fewer files do not take longer, which leads to the desire of many to start with files for family unification through European consulates in Erbil, and not in other capitals of the neighbouring countries of Syria.

Although the family reunification procedures take a long time and may extend for years, it is the most appropriate way compared to traveling illegally, which may eventually lead to death, as happened when a small boat sank off the Lebanese coast in Tripoli last month, which led to the loss of two Syrian women.

More than a million Syrian refugees live in Europe, more than half of them in Germany.

Jiwan Soz is a researcher and journalist who focuses on Syrian and Turkish affairs and minorities in the Middle East. He is also a member of Syndicat National des Journalistes (National Syndicate of Journalists [SNJ]). He tweets at @JiwanSoz1 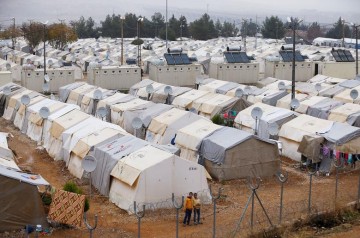 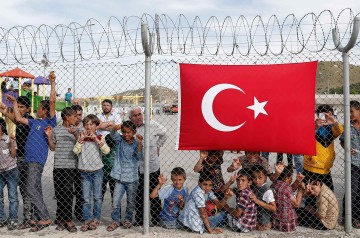 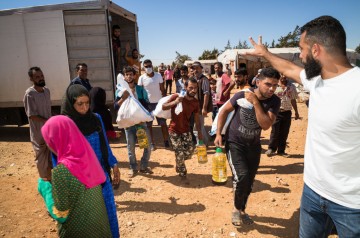