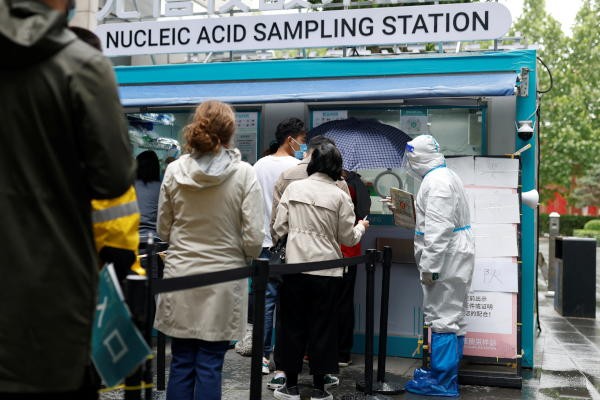 People line up to get tested next to a staff member wearing personal protective equipment (PPE) at a mobile nucleic acid testing site outside a shopping mall, amid the coronavirus disease (COVID-19) outbreak in Beijing, China May 6, 2022. REUTERS/Carlos Garcia Rawlins

Shanghai authorities were tightening the city-wide COVID lockdown they imposed more than a month ago, prolonging into late May an ordeal that China's capital Beijing was desperate to avoid by turning mass testing into an almost daily routine.

The commercial hub of 25 million was making a fresh push to bring case numbers outside the areas that were facing the strictest curbs to zero by the second half of May, people familiar with the matter told Reuters.

The people said movement curbs will generally remain through the month due to fears of a rebound even though case numbers have been falling. Authorities in some districts issued notices ordering people back into their residential compounds after having let them out for brief walks or quick shopping.

In a video shared widely on Chinese social media, police in hazmat suits argue with residents who were told they needed to be quarantined after a neighbour tested positive.

"This is so that we can thoroughly remove any positive cases," one of the officers is heard saying. "Stop asking me why, there is no why. We have to adhere to national guidelines."

Reuters was not able to independently verify the video.

The Shanghai government did not immediately respond to a request for comment.

The prolonged isolation and fear of being sent to quarantine centres, which sometimes lack showers and other basic conditions, have caused widespread frustration, even altercations.

Strict COVID restrictions in Beijing, Shanghai and dozens of other major cities across China are taking a psychological toll on its people, weighing on the world's second-largest economy and disrupting global supply chains and international trade.

The measures mark a sharp contrast with most of the world, which is easing or removing COVID curbs to live with the virus even as infections spread.

Beijing has closed gyms and entertainment venues, banned dine-in services at restaurants and shut scores of bus routes and almost 15% of its sprawling subway system, while many residents voluntarily avoid going out.

"It is quite strange," said a 50-year-old Beijing resident surnamed Ding, as he took a photo of an empty street leading into a closed subway station. "It is the first time in all my years in Beijing that I see empty streets in the middle of summer. It's magical."

Businesses that remained open were not seeing many clients as people did not want to do anything that might bring them near infected people and force them into quarantine.

“North of us are malls and offices that have been sealed, and their apps might mark them as close contacts if they came," said a barber surnamed Song, referring to the mobile monitoring software all residents must use.

“This outbreak has truly unsettled everyone."

Premier Li Keqiang in a teleconference with other top officials pledged on Saturday to support "as many employers as possible," especially among small and midsize firms, to keep people in their jobs, state media reported.

China's jobless rate stood at 5.8% in March, the highest since May 2020, while that in 31 major cities hit a record 6.0%. April's full lockdown of Shanghai and stricter curbs elsewhere have since further pummelled the job market.

Despite the costs, Chinese authorities are unwavering in their commitment to stamp out the coronavirus. Last week the authorities threatened action against critics of the zero-COVID policy.

Regular testing is set to become a feature of daily life in many cities, as officials hope that could help detect and isolate infections early enough to avoid mass closures and movement curbs.

On Sunday, residents lined up for another round of tests in Beijing's Chaoyang, Fangshan and Fengtai districts and small parts of others. In a large Chaoyang compound, two people moved around with loud speakers blaring a repeated message reminding residents to be tested.

Many residents, even if not subject to the mass tests, still must show a recent negative result to get to work or enter various venues.

Shanghai and other cities are also building thousands of permanent PCR testing stations.

Beijing's daily COVID cases are in the dozens, much lower than Shanghai's at this point in its outbreak, when infections were in the triple digits and rising.

Shanghai's cases fell for a ninth day, Sunday data showed, but remained in the thousands, prompting warnings against complacency from party and city officials. 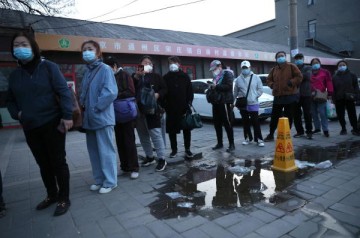 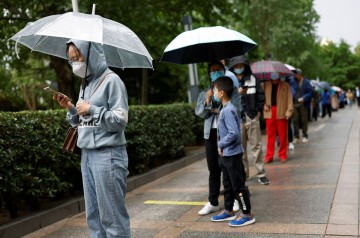