Protest Movement in Ahwaz “Fire Under the Ashes” 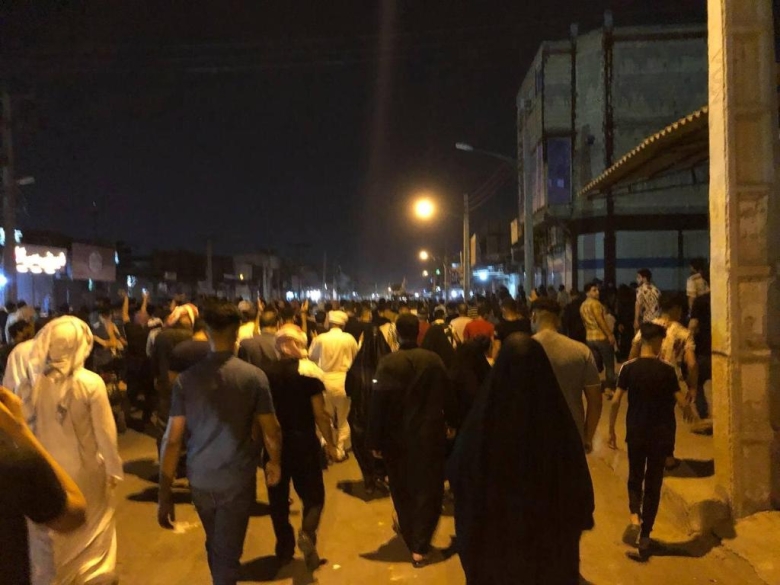 Part of the protests that erupted last July in Khuzestan, Iran.

It was not the first time Iran’s Arabs have taken to the streets desperate to end their grievances - but this time Ahwazis strongly rejected the regime’s systematic water shortage and racism which led to drained lands, water scarcity and dire economic and social consequences.

Ahwaz (aka Ahvaz) is the capital city of Khuzestan region, located in the southwest of the country, bordering Iraq and the Arabian Gulf. It was previously known as Arabistan, before it was annexed by force to the central government of Iran in 1925.

People of Arab ethnicity who form 4% of Iran’s population, make up 74% of the people of Khuzestan province which is home to some 80 percent of Iran's oil fields and 60 percent of the country's natural-gas reserves. In addition, Khuzestan was well-known for its fertile lands and rivers, which most of its residents depend on for agriculture.

Nevertheless, people of the resourceful region say their resources are depleting, as a result of the governmental campaigns to plunder them, even their lands and marshes have been left to drain due to the dams built by the regime to transfer the regions river waters towards Persian regions in central Iran. This water shortage was recently exacerbated due to climate change.

Yousef Azizi, Secretary General of the Center Against Racism in Iran, spoke to Majalla about the Ahwazi Arabs’ struggle to stand up against Iranian regime’s policies and oppression.

“People went out against water shortage and forced displacement. The Protests reflected a strong national patriotic spirit and holding on to the land. It was like a rosary extending throughout all cities of Arabistan aka Ahwaz,” he said, describing the recent protest movement which he saw as unprecedented in the region’s history.

The Iranian regime pursues policies of draining the lands and oppressing Ahwazis for two main reasons: it is a nationalist racist approach that dates back to Reza Shah Pahlavi’s era and has been resumed by the mullahs since the Islamic revolution; it aims to transform the demography of the region in favor of a Persian majority to be able to plunder its resources without any opposition by its original residents.

“Arabs in Khuzestan represent a ‘stumbling block’ to the Iranian regime, as they have been demanding their rights of self-determination and autonomous rule throughout past years,” Azizi explained.

Since the deposition of Sheikh Kazaal, the last Arab ruler in 1925, uprisings have erupted, and massacres took place against Ahwazi Arabs over the past 90 years even during the republic era.

“Anti-Arab racism has been present under Iranian rulers, whether they were religious or secular. They planned to change the direction of river streams towards deserts in central Iran to supply agricultural and industrial projects in Isfahan, Kerman, Yaz and Semnan,” Azizi confirmed.

During the Shah’s rule, there was similar social discrimination and poverty, that was why Iranian Arabs joined all other peoples who rebelled against the Shah.

However, the new Islamic rulers didn’t fulfill their promises to Ahwazis that they would end their grievances and fix the injustice they were subject to.

“The anti-Arab rhetoric continued from the royal era to the republic rule,” Azizi added. “The regime’s plans expanded further than those in the Shah’s era, and the same hatred and racism remained against Arabs. No difference between Shah or clerics.”

Azizi stressed that “The Uprising of the Thirsty” which extended over two weeks is a spontaneous movement which the people began in their capital of Ahwaz, then spread to al-Khafajiyah (Susangerd), Fallehiyeh (Shadegan), Muhammarah (Khorramshahr), Abadan, Shushtar and many other cities and villages.

Azizi pointed out, “The demands raised were provincial and national: to release the political prisoners, open the dams to irrigate the drained lands, and to solve the water crisis.”

Replying to a question about the calls for independence, Azizi deemed these calls “premature” saying, “Slogans raised in Ahwaz did not include calls for independence. They would be damaging for our cause, and we have gained support of Iranian and Persian populations. Thus, these premature slogans were not raised by our people.”

However, he stated that slogans against the “Guardian Jurist” and “People want to bring down the regime” were chanted in the protests.

“More people now chant against the Guardian Jurist, because they know that he is the ‘snakehead’ who supervises all actions that damage the region,” he explained.

“Chanting against the regime is a call to all Iranian populations, including Persians, that we share the same case against the Guardian Jurist and the oppressive regime which is based on racism, and economic and social inequality.”

One of the most prominent aspects in the recent protests was that it drew major domestic and International support.

Various races and national groups inside the country have been subject to similar political, social, economic and cultural discrimination and injustice, which motivated other Iranian races such as Bakhtiaris, Kurds and Azerbaijanis, to express their support for Ahwazis against the oppressive regime.

“In spite of the authority’s attempts at separating Arabs from their neighbors, the neighboring Bakhtiari people chanted for unity with Arabs. The chanted in Persian, ‘Bakhtiaris and Arabs are united’,” Azizi told Majalla.

“Also the Kurds in Kermanshah city of Saqqez, took to streets but were violently crushed.”

Moreover, the Iranian Azerbaijanis, in northwest of Iran, expressed their solidarity as they took to streets and chanted: “Azerbaijan and Ahwaz are united”.

Azizi expressed his people’s gratitude “for the notable slogans and support offered by the Azeris who are located in the northwest, more than 1000km away from Ahwaz.” He added that “Iranian Azerbaijanis (Turks) form a large portion of the population and enjoy influence, as their numbers are almost equal to Persians. But they suffer the same racial discrimination by the rulers, so they sympathized with us, and we have been coordinating with them for decades.”

Internationally, the United Nations High Commissioner for Human Rights, Michelle Bachelet expressed support for the uprising, and denounced the Iranian measures of building dams and draining the rivers. The US Department of State also condemned the measures along with other countries and western media.

In this regard, Azizi stressed that it is important for “independent Ahwazi activists and political groups to benefit from this international and domestic support in upgrading their political struggle against Iranian oppressive rulers to gain their historic and legitimate rights in Ahwaz.”

It is not surprising that the initial response by the regime was violent crackdown against the protestors demanding their rights to the region’s water.

Video footage of riot forces firing tear gas and live ammunition to crush the mostly peaceful protests went viral on social media. At least eight people were killed in seven different cities, while “scores of people, including children, have been injured, including by birdshot, and several are hospitalized in critical condition due to gunshot wounds,” according to Amnesty International.

However, Khamenei broke his silence after days of protests. He showed understanding of the people’s grievances. Apparently, he felt the risk of the protests culminating into a widespread revolution, especially after the crackdown failed in dispersing the people and preventing them from chanting against the regime and its figures.

The Supreme Leader promised to open the dams and dispatched the commander of the Islamic Revolutionary Guard Corps, General Hosein Salami, to the troubled region.

“General Hossein Salami was dispatched by Khamenei to oppress the uprising of Ahwaz. Salami applied undeclared martial laws and met with security and military officials while removing the province governor. Upon his orders, the brave city of Khafajiyah was besieged by concrete barriers, to separate it from Ahwaz amid internet shutdown and widespread detentions,” Azizi noted.

This proves that Khamenei didn’t listen to the Ahwazis’ grievances, but he was rather seeking temporary solutions which Azizi said would not provide full water access to Khuzestan’s desperate cities and villages.

“The structural problem was not solved. Dams are opened and water tanks are sent to temporarily end the thirst, but water has not reached many remote areas. The solutions provided are just ‘painkillers’ to pretend they solved the crisis. In fact, the problem is still there,” Azizi insisted.

“The grievances of discrimination and racism also remain unsolved, in addition to lingering water scarcity, poverty, and unemployment.”

“The marshes are still drained so Chinese oil companies, and IRGC contractors and companies such as Khatam al-Anbiya Construction and other Quds force companies, can steal the region’s resources,” he added.

Uprising Has Not Ended

Arguably the protest movement which seems to be quiet now has not ended.

“In contrary to the regime’s expectation, the uprising is like ‘fire under ashes’ that may erupt again anytime,” warned Azizi.

“Ahwazis now understand the regime’s plots and evil plans that threaten their existence, so they resist and sacrifice in order to foil these plans,” he remarked.

Tehran’s Killing Machine to Get Rid of Influential Opponents

What Raisi’s Presidency Means for the Region 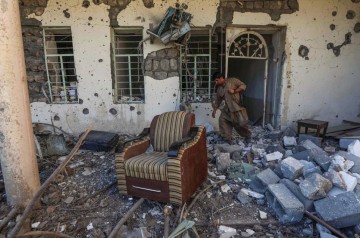 Tehran’s Killing Machine to Get Rid of Influential Opponents 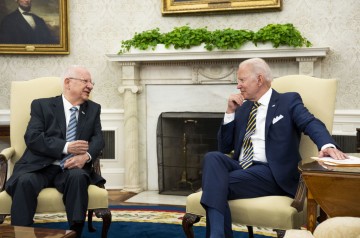 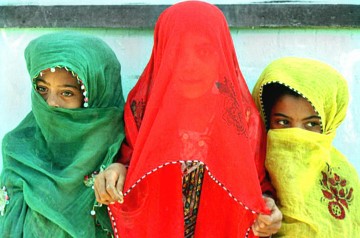