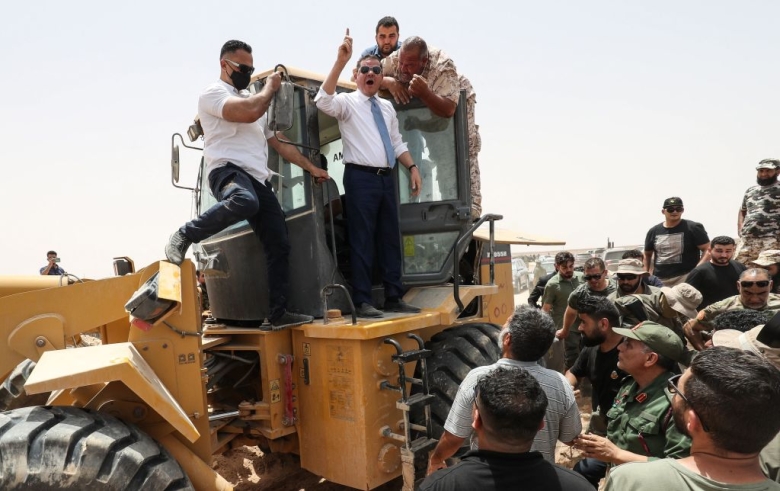 Libyan Interim Prime Minister Abdulhamid Dbeibah, waves as he stands atop an excavator on June 20, 2021, in the town of Buwairat al-Hassoun, during a ceremony to mark the reopening of 300-kilometre road between the cities of Misrata and Sirte. (Photo by MAHMUD TURKIA/AFP via Getty Images)

The smell of war is all over Libya. The euphoria generated by electing a new interim government, in January, under the endorsement of local, regional, and international actors, has diminished. Tensions between almost all political factions in Libya, their military troops, and foreign backers, are escalating and intensifying, since June. The minor disagreements over specific political decisions, that needed to be taken or dismissed by the interim government, are now turning into a tug-of-war between Benghazi and Tripoli that is hindering the continuity of the political solution process and, thus, threatening to drag the country into another round of civil war.

The urgent question is: what are the specific actions that the international community needs to take to put a brake on the growing internal political tensions in Libya before they escalate to an actual war, which will be awfully difficult to control this time? The answer to this question is to discover the catalyst element of conflicts and cut it out of the Libyan equation, in a swift but smart way.

The latest round of meetings on the situation in Libya at the United Nations Security Council (UNSC), held on July 15th, was surrounded by much pessimism. The meeting, in New York, was attended by foreign ministers of UNSC member states; Jan Kubis, the UN Special Envoy for Libya and also the Head of the UN Support Mission in Libya (UNSMIL); and Abdel Hamid Dbeibeh, the Prime Minister of the Libyan interim Government of National Unity (GNU).

In a pessimistic tone, Kubis warned the gathering officials at UNSC against what he described as “the growing confrontational situation in Libya.” Kubis noted that some “status quo forces” use diverse tactics to obstruct the conduct of necessary preparatory procedures for holding the general elections in December. “The constitutional basis for elections should have been clarified by now. Regrettably, the House of Representatives, the mandated body to do so in consultation with the High Council of State, has not delivered yet;” said Kubis affirming the inability of the Libyan Political Dialogue Forum (LPDF) to decide on the issue.

Although Kubis did not name the ‘status quo forces,’ it is easy to guess that he is referring to the Libyan National Army (LNA), which operates from Benghazi under the command of Marshall Khalifa Haftar. LNA controls the majority of eastern and southern territories of Libya. Haftar is backed by Russia, France, and the United Arab Emirates (UAE). He commands military personnel from the old and dissolved Libyan military forces of Gaddafi, as well as African mercenaries and about two-thousand mercenaries affiliated to the Russian Wagner Group.

At the UNSC ministerial meeting, Russia’s Ambassador to the UN claimed that the existence of Russia-affiliated armed groups in Libya is necessary for “making sure that the current balance of forces on the ground not be disrupted, because it is thanks to this balance that the situation in Libya remains calm and no threats of armed escalation emerge.” Clearly, the Russian Ambassador is hinting at the rival Turkish troops and mercenaries, who support the GNU’s small army, by noting “the balance of forces on the ground.”

The GNU-commanded military is currently the official national armed forces in Libya. It is a relatively new military, formed from middle-age officers who belong to families in western Libya, and some Libyan militia, who were operating under the command of the previous Government of National Accord (GNA). The Turkish armed forces helped GNA form this military, based on a military agreement signed in December 2019. Since then, the Turkish military has been providing the Libyan military with training, consultancy, and equipment. GNU military forces work side by side with the Turkish military troops, of about 1900 military personnel, deployed in Tripoli, since 2019. Both Turkish and Libyan troops, in Tripoli, are operating under the direct supervision of the Turkish Minister of Defense, Hulusi Akar. In addition, Turkey owns about fifteen thousand mercenaries inside Libya.

On June 13th, Hulusi Akar visited his troops in Tripoli and made strong statements against LNA and Haftar. Akar said that Haftar is the main problem for Libya, and accused LNA of the mass killing of Libyans in Tarhuna and other eastern and southern cities. As expected, the LNA and other politicians in Benghazi got offended by Akar’s visit and statements. In a video statement, LNA spokesperson accused Akar of bringing illegal weapons with him, on his private plane, during this surprise visit. He also accused Turkey of disturbing Libya’s stability and halting the scheduled elections, in December.

On the same week of Akar’s visit, on the 20th of June, LNA moved troops to block the border crossing between Libya and Algeria and declared the area a military zone. GNU responded immediately by an official statement prohibiting the movement of military troops, whatever their affiliation is, without direct instructions from the central military command in Tripoli. LNA’s surprise move happened on the same hour the GNU Prime Minister announced the re-opening of the coastal road, as a sign on Libya’s success in achieving unity between eastern and western conflicting factions. LNA has always opposed the opening of the coastal road because it means submitting to the GNU military and consequently kicking the Russian mercenaries out of the country. Unfortunately, the next day the GNU had to close the coastal road, once again, to avoid clashing with Haftar troops.

Two days later, on June 23rd, at the conclusion of the Berlin II Summit on Libya, GNU’s Foreign Minister mentioned that the foreign troops and mercenaries, either affiliated to Russia or Turkey, will start to gradually depart from Libya, in the following days. Yet, a whole month has passed since then, and no one has left. On the contrary, the security situation is getting worse. On June 26th, clashes erupted between two tribes in Benghazi, leaving at least five people killed. The militia elements and the weapons used in these clashes brought to mind the notorious battle of Benghazi that erupted in 2014 and continued throughout the first three years of the Libyan Civil War II (2014 – 2019).

Despite Haftar’s initial endorsement to GNU, after being elected in January and his continued confirmation on the necessity of holding elections in December, his LNA fails to coordinate operations with the GNU’s armed forces. Haftar’s move to block the border between Algeria and Libya was meant to send a warning to the GNU, Turkey, and other regional and international interlocutors that he and his LNA should not be ignored or marginalized in any future plans regarding the political leadership of Libya. After the elections of the GNU, in January, Haftar expected to be hired as the Minister of Defense and thus become the commander of both the LNA and GNU’s military. This was going to be a big victory for him, and his foreign backers, especially UAE and France, against their long-time rival – Turkey.

Abdul Hamid Dbeibeh, GNU’s Prime Minister, mentioned, in March, that he could not name a minister of defense for his government because of extreme foreign pressures. During the UNSC ministerial meeting in June, Dbeibeh reiterated that it is difficult to unite the armed forces in Libya under the umbrella of one national army due to the continued presence of “foreign fighters who pose a serious threat to the current political process and also threaten the efforts to keep the ceasefire." In an interview with Reuters, on the same day, Dbeibeh mentioned that his government is finding a difficulty collaborating with Haftar. “Of course, we are communicating with Haftar. He is a difficult military person, but we communicate with him. But things are not easy;" said Dbeibeh.

In the past two weeks, Haftar succeeded in aligning the Parliament, based in Benghazi, to support him. The Speaker of the Parliament, Aguila Saleh, said in a meeting with Haftar on July 16th, that the Parliament will not approve the government budget for GNU unless they allocate a budget for LNA. Some local observers claim that Haftar and Saleh are planning to form a parallel interim government in Benghazi, that will act independent from the GNU in Tripoli. This claim is supported by Haftar’s decision, on July 21st, to deploy intense troops at the southern territories. If true, this will be a knockout to the entire political process.

The only beneficiary of the current situation in Libya are the foreign backers of each of the disputed parties in eastern and western territories. The United Nations and the international community are exerting tremendous efforts to help Libya stand on its feet as a sovereign state. However, most of those efforts are directed at the wrong, or not so useful, spots.

For example, everyone is pressuring for holding the general elections in December; that is in less than five months from now. However, no one is discussing how to guarantee that the prospected elections will be free and fair, so the voters will not be manipulated and the elections will not be rigged. Likewise, everyone is calling for the removal of foreign troops and mercenaries from Libya. There is no question that this is a crucial first step for Libya’s recovery from a decade of internal armed conflicts. However, everyone needs to understand that it is impossible for the foreign troops to leave Libya as long as the armed forces, which they are backing either in western and eastern Libya, are unable to unite into one army.

In that sense, respective players in the international community need to reassess their vision towards the political solution in Libya. They should focus on solving the underlying causes of the conflict rather than being obsessed with healing the symptoms. The underlying reason for dispute is marginalizing Haftar and his LNA. Whether we like it or not, there must be a way to contain Haftar by integrating his armed forces and resources of political power into the formal government of GNU. Otherwise, Libya will continue to suffer from foreign interventions facilitated by the division between eastern and western Libya, forever. 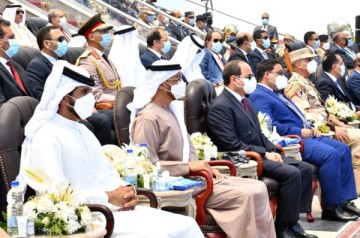 Egypt’s Sisi Opens Naval Base Close to Border With Libya 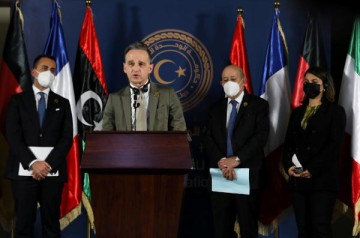 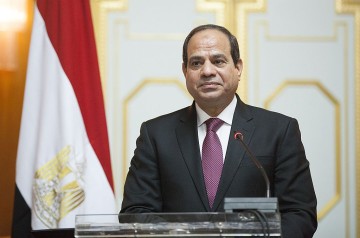