The Egyptian Navy’s Journey from Surviving to Thriving 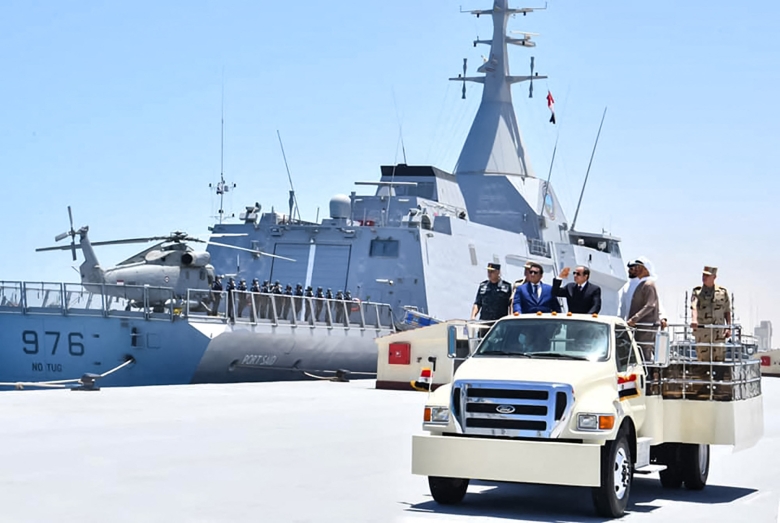 A handout picture released by the Egyptian Presidency on July 3, 2021 shows Egyptian President Abdel Fattah al-Sisi (C), accompanied by Abu Dhabi Crown Prince and Deputy Supreme Commander of the United Arab Emirates Armed Forces Sheikh Mohammed bin Zayed Al-Nahyan (C-R), riding in a vehicle next to a warship during the inauguration of the new "July 3" naval base in Gargoub, about 80 kilometers west of Egypt's northwestern Mediterranean coastal city of Masra Matruh. (Courtesy of the Egyptian Presidency/AFP)

Seven years ago, the Egyptian Navy was struggling to barely survive on old and rusty equipment and devout, but modestly educated, personnel. Today, the Egyptian Naval Forces are among the top ten strongest navy fleets in the world and the Egyptian navy personnel are constantly involved in joint military exercises, all over the globe. The Egyptian administration of President Abdel Fattah El-Sisi exerted a huge effort, in a record time of only five years, to bring the Egyptian Armed Forces, in general, and the Egypt Navy, in particular, to the current impressive level of superlative personnel and topnotch equipment.

(2) upgrading personnel skills by subjecting them to continued local and international training and education; and

(3) building giant naval bases on critical geopolitical spots at the shores of the Mediterranean and the Red Sea.

The New Masters of The Two Seas

According to Global Firepower index for the year 2021, the Egyptian Navy is ranked the seventh strongest navy fleet in the world. That makes Egypt the strongest maritime power in the Mediterranean and the Red Sea basins. Turkey and Greece, Egypt’s immediate neighbors in the eastern Mediterranean, respectively fall at the 20th and the 23rd positions on the same index. The historically powerful Italian and French navies are respectively ranked at the 11th and 17th positions. Meanwhile, Egypt’s Red Sea neighbors on both the Asian and African shores got a very deteriorated ranking; in the hundreds.

The journey to refurbish the Egyptian Naval Forces started in January 2017 by the historical decision to split the navy into two fleets: north and south. The north fleet operations cover the Mediterranean region with the purpose to secure Egypt’s northern and western strategic fronts. The south fleet is focused at the Suez Canal and the Red Sea region, and is responsible for securing the eastern and southern fronts. The split of the fleets dramatically improved the performance and flexibility of the several commands of the naval forces and inspired a whole new perspective for armament strategy based on the nature of operations assigned to each fleet, which is defined by the geopolitical context of the operation zone.

On one hand, the north fleet is designed to cope with the growing geopolitical conflicts in the eastern Mediterranean region over maritime zones and hydro-energy resources. Its primary mission is to protect Egypt’s economic interests, especially the newly built gas fields and the cross-continental electricity network connecting Egypt, Israel, Cyprus, and Greece via the Mediterranean. In addition, the north fleet is trained and equipped to control the flow of illegal immigration from North Africa to Europe.

On the other hand, the south fleet is mostly concerned with deterring the infinite security threats coming from the political mess in Yemen and the Horn of Africa region, where terrorist organizations and Iran-sponsored militia are constantly harassing ships and blocking vital maritime passages. In that sense, the Egyptian Navy’s south fleet is playing a crucial role in securing a smooth flow of international trade between Asia, Africa, and Europe via the Red Sea and the Suez Canal.

On the first week of July, the Egyptian President El-Sisi launched the long-anticipated “Third of July” naval base, on the Port of Gargoub, at Egypt’s northeastern coast in the Mediterranean. The new giant naval base (2650 acres) is named the “Third of July” to remember the day of people and military uniting to remove the Muslim Brotherhood regime from power, in 2013. Senior delegations from neighbor Arab countries attended the opening ceremony, including H.H. Sheikh Mohamed Bin Zayed Al-Nahyan, the Crown Prince of Abu Dhabi and the Deputy Supreme Commander of the United Arab Emirates Armed Forces; and the President of the interim Presidential Council of Libya, Mohamed Al-Menfi.

Mohamed Naguib base, which started operation in July 2017, is the biggest military base of its kind in Africa and the Middle East. Its primary mission is to secure El-Dabaa Nuclear Proliferation Plant. It is designed to accommodate special operations by air, navy, and ground troops. In September 2018, Mohamed Naguib base hosted the United States Central Command’s milestone military exercises; “The Bright Star,” with the participation of air, ground, and navy troops from Egypt, the United States, the United Kingdom, France, Greece, Italy, Saudi Arabia, and Jordan, in addition to 16 observer countries.

The “Third of July” naval base, which is located only 70 kilometers away from the landmark Mohamed Naguib military base is believed to play a crucial role in enhancing Egypt’s political and military cooperation with Libya and thus ending Turkish and Russian military intervention there. The “Third of July” base is located on the Mediterranean shores between the cities of Marsa Matrouh and Sidi Barrani; on a land distance of 121 kilometers (about one and a half hour by car) away from Libya. The participation of the Libyan interim President, Al-Menfi, in the opening ceremony of the new base, in Gargoub, supports this hypothesis.

Libya represents the western strategic depth of Egypt’s national security. The quavering security situation in Libya and the expected failure of the political process is of great concern to Egypt, especially due to the existence of Turkish troops and foreign mercenaries, who are separately commanded by Turkey and Russia, on the Libyan soil.

From Rusty Vessels to Mistrals

To put things into perspective, let’s compare the profile of the Egyptian navy fleets today to its status a few years ago. In 2011, the Egyptian navy merely owned four submarines, procured from China in early 1980s, in addition to a couple of secondhand surface warships recycled by the U.S. Navy and sold to Egypt in the 1990s.

Fast forward to 2021, Egypt has become one of only five countries, in the whole world, that owns assault aircraft carriers. There are only 37 aircraft carriers, in the world. They are owned by the United States, Russia, China, and France. In the year 2000, France manufactured and sold a projection and command ship for Brazil. Egypt owns two of the 37 flagship carriers. They are the mistral-class amphibious assault ships: Gamal Abdel Nasser and Anwar Al-Sadat.

In addition, the Egyptian Navy owns FREMM frigates especially made for Egypt by Italy and France; hunter-killer submarines Type-209/1400mod; and locally/joint manufactured GoWind corvettes. Last January, the Egyptian Navy celebrated the production of the first Egyptian-made GoWind corvette with the name “Port Said.” This is the first warship, in the Egyptian fleet, to be equipped with a built-in complex combat monitoring system that can detect and trace rival ships, planes, and submarines. Since 2018, Egyptian naval factories have been working closely with French and German shipbuilding companies on transferring latest technology in that field to Egypt.

At the opening ceremony of the “Third of July” naval base, earlier this month, President El-Sisi raised the Egyptian flag on 47 new naval vessels, marking their entry into the Egyptian fleet. That includes 28 pieces of the Rigid Hull Inflatable Boat (abbreviation: RIB or RHIB), which is a high-speed, high-buoyancy insertion/extraction craft for Sea, Air, and Land teams; known as SEAL teams or navy commandos. RHIB can operate in extreme-weather conditions, despite their light weights.

At the conclusion of the opening ceremony of the “Third of July” naval base, two weeks ago, the Egyptian navy forces and SEAL/commandos teams performed “Kader 2021” drills, with the purpose to showcase the recently procured naval equipment and the superior skills of the naval personnel. The Egyptian navy forces played a heroic role in the 1973 war against Israel. However, in the decades between 1980s and 1990s, the level of the Egyptian navy personnel radically deteriorated due to lack of access to proper international education and training. Therefore, in parallel to building the infrastructure of the naval forces, upgrading personnel level of education and combat skills has also been a priority to the Egyptian leadership.

Since 2019, the Egyptian navy personnel have participated in a large number of regional and international military exercises, not only in Egypt’s territorial waters, but also in places as far as the Black Sea. In October 2020, Egyptian and Russian naval forces conducted the “Friendship Bridge” joint exercise, in the Black Sea, for the first time in history. This month, the Egyptian navy personnel are in Ukraine participating in the “Sea Breeze 2021” drills in the Black Sea (from June 28th to July 10th), shoulder-to-shoulder with navy and air soldiers from other 32 countries, under the supervision of the U.S. Sixth Fleet.

It is important to mention, here, that the “Sea Breeze 2021” is the first ever military exercise to bring soldiers from Egypt, United Arab Emirates, and Turkey to work together, not against each other. That is of a huge significance given the recent diplomatic disagreements and military clashes between the three countries in Libya and the Mediterranean.

The majority of Egypt’s borders are on the shores of two of the most critical maritime basins, in the world. The Mediterranean and the Red Sea are connecting the three most-inhabited continents together. They also control a large portion of world economy, that is not only because the majority of international trade flows through them, but also because of the recent gas discoveries in the eastern Mediterranean. In a record time of five years, the Egyptian administration of President El-Sisi has successfully upgraded the naval fleet to become the strongest fleet in the whole Mediterranean and Red Sea regions. This is not only serving Egypt’s geopolitical and security goals, but also works in the best political and economic interests of the Middle East and Egypt’s allies in Africa and southern Europe.