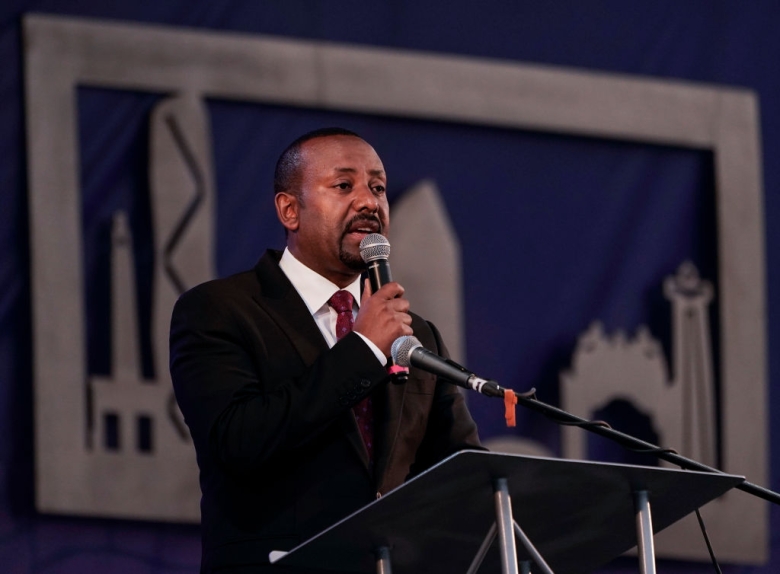 The Ethiopian government is purposefully involving religious rhetoric into justifying its technical dispute over the Nile River with Egypt and Sudan. The reasons why Abiy Ahmed government decided to Islamize the Nile River conflict, by employing government loyalist Muslim imams to promote a political agenda, in a Christian majority society, are worth exploring.

For years, the Ethiopian government of Abiy Ahmed has been promoting the building of the Grand Ethiopian Renaissance Dam (GERD) as a nationalist cause. The government’s unrealistic rhetoric around the political and economic benefits that GERD may incur to the Ethiopian nation is serving the political interests of the ruling elite. On one hand, it justifies the huge spending on the building of the dam, while the Ethiopian people are struggling with a drowning economy. On the other hand, it provides Abiy Ahmed with a cover to his atrocities against civilians in Tigray and his failure to manage the border conflict with Sudan. In addition, this fanatic nationalist rhetoric is serving the purpose of mobilizing the Ethiopian citizens to vote for Abiy Ahmed and his affiliate politicians, in the current general elections, despite their proven failure to run state affairs and Ethiopia’s deteriorating relations with its neighbors.

Unfortunately, the diplomatic negotiations over the Nile River conflict between Egypt, Sudan, and Ethiopia, which has been running for over a decade, hit a deadlock in April. Egypt is the downstream country, while Ethiopia is geographically located where the river springs, and Sudan geographically stands in the Middle. Egypt and Sudan object the building of GERD on the Blue Nile because it affects their share in the water of the river. Government propagandists, in the Ethiopian media, unfairly portray Egypt as an aggressor on Ethiopia’s sovereignty for merely trying to get Ethiopia to sign a binding agreement that protects downstream countries from the potential abuse of GERD by the current or future Ethiopian governments.

For the international audience, Ethiopia justifies the building of the dam by the need to generate electricity for about 65% of the population. For the local audience, the Ethiopian government promotes a strange lie, supported by religious leaders, that the Nile is a gift from God to Ethiopia, and thus Ethiopia is the legitimate solo owner of the Nile. In that sense, they claim that Ethiopia can hold the water behind a dam to sell it later to other countries and become rich, the same way Arab Gulf countries profited from selling the oil discovered in their geographic territories.

After the failure of negotiations in April, Egypt and Sudan started to seriously think about going to war with Ethiopia. In March, Egypt signed a military cooperation agreement with Sudan, followed by a joint military exercise at Merowe military base, in southern Sudan, close to Ethiopian GERD. In late May, Egypt and Sudan conducted another military exercise, in southern Sudan, under the title “Nile Protectors” wherein Egypt deployed land forces and advanced aviation equipment to deter Ethiopia from proceeding with filling the dam, which was scheduled in early June. Meanwhile, Egypt signed other military cooperation agreements with Uganda, Kenya, and Burundi.

Amidst the heated political and military tensions, leaders of the Ethiopian Muslim community, have been actively producing fatwas (religious advice) to mobilize the Muslim citizens to support the building of the Grand Ethiopian Renaissance Dam (GERD). In March, Sheikh Haji Omar Idris, the Grand Mufti of Ethiopia, made up a fatwa claiming that Ethiopia is the God-assigned owner of the Nile water, and accordingly Egypt has no right to ask for using the water that springs outside of its geographic area.

“The Egyptians say that they are affected by Ethiopia’s use of the Nile water. This is not fair and is against the teachings of Islamic Sharia;” advised Sheikh Haji Omar Idris, the Grand Mufti of Ethiopia and the President of the Ethiopian Islamic Affairs Supreme Council. “Sharia has proven that the country in which the water springs, must benefit from it, then give what exceeds its needs to its neighbors, if it desires to.” During the prayers of Eid Al-Fitr, in May, several Ethiopian youths showed up carrying slogans and banners reading that it is Ethiopia’s Allah-given right to block and sell the water of the Nile.

Idris based his misleading fatwa on a saying by Prophet Muhammed. However, the Egyptian Fatwa House (Dar Al-Iftar), in May, refuted such claims and published a prophetic saying confirming that naturally flowing water cannot be owned by anyone, as it is a common share among all humans. Then, on June 12th, the Grand Imam of Al-Azhar, Dr. Ahmed Al-Tayeb, seized the opportunity of his participation in the United Nations Environment Day, to indirectly comment on the Nile River conflict.

“Environment is in crisis, because of those tampering with Allah’s creations and lands… It is inappropriate to let an individual or a country practice monopoly over natural resources and deprive others from getting access to these resources;” said the Grand Imam in his UN speech. “Water, in its comprehensive concept, is a natural resource that is treated as a common property to all humans, according to the teachings of all religions, not only Islam. No one can exclusively own a water resource. Depriving others from benefiting from natural resources is an act of oppression and aggression on Allah’s provisions;” Sheikh Ahmed Al-Tayeb added, calling upon respective local, regional, and international bodies to appropriately intervene to stop such manipulation that is expected to harm humans and Earth.

Al-Azhar is the highest religious authority in the Muslim world. While the Grand Imam’s message was widely applauded by the Egyptian and Arab audience, some western audience could not understand the background story that pushed a senior religious scholar to comment on a geopolitical conflict. In fact, Al-Azhar’s comment is a necessary reaction to the shameful abuse of religion by the Ethiopian government to justify endangering the lives of tens of millions of humans in downstream countries by building a dam on the upstream of the Blue Nile.

It is strange to see the Ethiopian Muslim leaders, who have always been keeping a low-profile, all of a sudden involved in public activities and commenting on geopolitical issues. But there is a reason for that. They are paying back the favor to Abiy Ahmed. For decades, the Muslim citizens in Ethiopia suffered from marginalization, discrimination, and persecution on the hands of the government and other religious groups, especially during the communist era of Mengistu Haile Mariam. Ethiopian Muslims have been denied basic rights to declare their religious identity or practice their religious ceremonies and prayers in public. That is despite their relatively large percentage as a religious group. Muslims in Ethiopia, who represent nearly 35% of the population; are the second-largest religious community in the country.

Only in January 2020, Abiy Ahmed government recognized the Ethiopian Islamic Affairs Supreme Council, after sixty years of working as an outlawed civil society organization. This provided Muslim citizens with a relief as they have become free to show their identity and celebrate their religion. This is a move that Abiy Ahmed government should be applauded for. However, on the flip side, it seems that Abiy Ahmed had another strategic goal from empowering the Muslim community amidst his quest to continue with the GERD project.

Recognizing and empowering the Muslim community, first brought the Muslim community to support Abiy Ahmed rather than joining the opposition against him. They are now part of his propaganda machine, mobilizing millions of Muslim citizens to support the government decisions and vote for Abiy Ahmed’s favorite politicians in elections. Second, Abiy Ahmed is employing the politicized religious rhetoric of his Imams to confuse the public citizens in Muslim-majority countries, Egypt and Sudan, regarding the legitimacy of the stances of their governments on the Nile conflict. Most of the misleading fatwas issued by Ethiopian Imams, in relation to GERD, are published in Arabic; not in English or Swahili or Amharic.

The Nile River conflict has become too complicated and almost impossible to resolve through regular diplomatic means. Adding the religious component to this ugly dispute is a very dangerous gamble that the Ethiopian government need to stop playing. This does not only threaten the security of Ethiopia, but also provides a new tool for terrorist organizations operating at the already security-fragile Horn of Africa region, to revive their activities and recruit new supporters.