Call for U.S.-Europe to Support 3SI 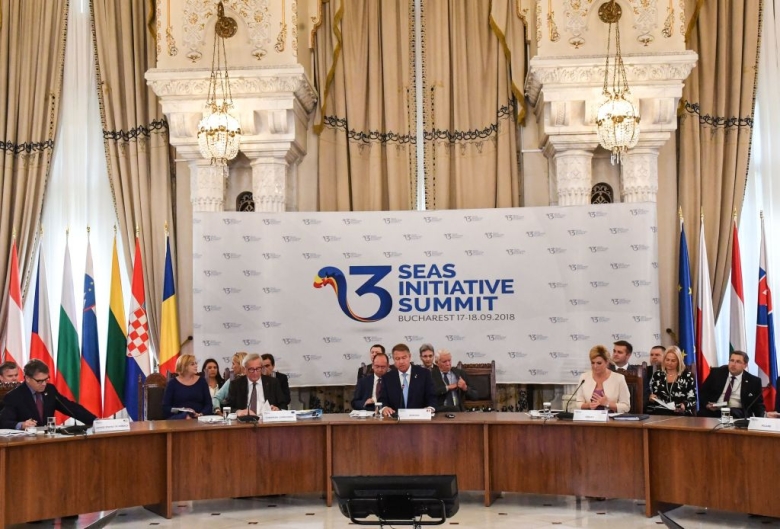 Jean-Claude Juncker (C), President of the European Commission and representatives of the Three Seas Initiative (3SI or TSI) takes part in a TSI Summit, on September 18, 2018 at the Cotroceni Palace, the Romanian Presidency headquarters in Bucharest.

The Three Seas Initiative (3SI) was launched in 2015 as a massive infrastructure investment project involving 12 European countries from the Baltic, Adriatic, and Black Sea regions. Austria, Bulgaria, Croatia, the Czech Republic, Estonia, Hungary, Latvia, Lithuania, Poland, Romania, Slovakia, and Slovenia represent almost a third of the European Union by area, are home to over 110 million people, and make up the fastest growing economies in Europe. Yet their communist past – half a century spent under authoritarian rule while separated from Western Europe - has left significant gaps in their development, particularly in terms of infrastructure and connectivity. It is estimated that over one trillion euros is needed to make up for the shortfall in investments in the infrastructure, energy, and digital fields. New ports, highways, railways, and pipelines are needed to increase and ease connectivity in this region, which in turn would help accelerate economic growth and development and help Central and Eastern Europe catch up with Western Europe in this regard. These shared challenges brought the heads of the 12 states together six years ago, forming the 3SI. The Initiative holds an annual summit hosted by one of the member nations, and now includes a commercial investment fund as the main vehicle to finance key infrastructure projects in the region while granting a diversified investment and an attractive return to its investors.

The 3SI Fund focuses on three major areas: transport; energy, efficiency, and security; and digital and information technology. One of its most notable and innovative projects includes the “Greenergy Data Centers” project, which will be completed this year in Estonia first, and will later cover the entire region. “Greenergy will develop much-needed infrastructure across the Three Seas region to meet the growing compute, storage and connectivity needs of enterprises and consumers. Greenergy plans to develop a number of data center projects in the Three Seas region over the coming years, with the Greenergy platform servicing the growing needs of customers across the CEE region in an otherwise under-supplied market for such infrastructure.” Unlike 5G technology, green energy-based data storage centers provide an opportunity to invest in cross-border projects as data-flow is not limited by national borders. Other projects aim to develop greater port capacity, help make Europe fully green-energy reliant, and add rail networks.

In the post-Covid and post-Trump West, where deepened transatlantic cooperation and renewed focus on US-European shared democratic ideals seems inevitable, the 3SI carries vast geopolitical importance. In recent years, within the auspices of its Belt and Road Initiative, China has formed a 17+1 cooperation initiative with European countries, pouring billions in FDI and investing in major infrastructure projects such as ports in Greece, Spain, and Belgium. Russia, on the other hand, remains the only energy supplier to many of these countries, and has used their energy dependence as political leverage. For many of the vulnerable European nations, especially in the aftermath of the 2008 economic crisis, attracting Chinese investments and ensuring low energy prices from Russia have seemed like obvious solutions to boosting economic growth. But much like the energy-dependence on Russia – especially in the aftermath of the Ukraine crisis in 2014, economic ties with China have started to appear more like a political trap. Back in May Lithuania even left the 17+1 framework over its soured relations with China, calling the initiative divisive and suggesting the EU take a more wholistic approach to China in a “27+1” format.

The 3SI is a major undertaking – a project that will require plenty of time and money in order to achieve its pragmatic goals, but also in order to fulfill its geopolitical potential. In the time of great power competition when Russia and China have risen as main challengers to US-EU strategic interests and democratic ideals, Central and Eastern European nations seek deeper unity and cooperation with both – Western Europe and the United States. In this context the 3SI represents a major vehicle for sustainable and deeper European integration, and a tool for greater confidence-building and cooperation between the EU and the United States. The Initiative’s leaders present it as a European project – something that is one of the development tools for the EU, not counter to the EU. Thus, the European Commission is closely involved in the Initiative, and Germany is a major partner. The Biden administration has also expressed its support for 3SI, but American and Western European financial investments will be the most crucial form of support for this Initiative.

However, arguably one of the greatest vulnerabilities in the 3SI region is in the Black Sea basin. The 3SI currently only consists of the EU member states that are located in the three seas region, so it currently excludes Ukraine, Moldova, and Georgia. These are three EU membership aspirant countries that enjoy special ties to the European Union through their Association Agreements, Deep and Comprehensive Free Trade Agreements (DCFTA), and visa-free travel regimes and are generally considered to be on their way to eventual EU and event NATO membership. These three countries are also completely exposed to Russian and Chinese influence and remain deeply vulnerable to security threats emanating from Russia in the absence of NATO’s Article V protections and in the presence of Russian military forces on their de jure territories (each has a protracted separatist conflict zone backed by Russia).

Both, the EU and the US acknowledge the importance of bringing more coherence to the Black Sea region. Geopolitically the Black Sea is perhaps more complicated than ever before. EU member states in the East (Bulgaria, Romania) directly border (by land or sea) countries that are dominated by Russia militarily and or politically: Moldova, Ukraine, Georgia. The ports in Russian-annexed Crimea are off-limits to the West under the sanctions against Moscow. Russia itself is essentially cut off from the West thanks to its soured relations with the West and continuous military buildup in its maritime domain. And Turkey – a major Black Sea state - has gradually become a geopolitical wildcard; it is still a member of NATO but a close ally to Russia and increasingly anti-Western. Many of Ukraine’s valuable assets in the east and in Crimea are paralyzed thanks to Russia. Georgia, in the meantime, presents one of the last significant opportunities for building deep sea ports and connecting Central Asia and the Caucasus region to Europe through new highways and railroads. But there too, creeping Russian influence in politics has led to a great deal of development paralysis and economic stagnation.

The Black Sea basin is now seen as a region of high strategic importance by NATO. Its recent statement on “tailored forward presence” is a good example of this:

“Tailored forward presence contributes to the Alliance's strengthened deterrence and defense posture, to Allies’ situational awareness, interoperability and responsiveness. All of these measures contribute to a peacetime demonstration of NATO's intent to operate and train together in the Black Sea region without constraint. At all times, NATO deployments are transparent and in line with its international commitments and obligations. In response to Russia’s actions in the Black Sea region in November 2018, NATO decided to increase its presence in the region to further improve situational awareness. Allies have also stepped up their support for Georgia and Ukraine with more training and exercises for maritime forces and coast guards, as well as port visits.”

But the challenges in the Black Sea region are diverse and complex. They cannot be fixed just militarily or just diplomatically. The region is in desperate need for Western-led economic development, and including Georgia, Ukraine, and Moldova in the 3SI projects would be the most natural way to go about it. The three countries have already affirmed their readiness to join the Initiative. And the 3SI countries seem to be aware of this need. On May 5th, in a joint press conference, presidents of Estonia and Poland stated that Poland and Estonia need to work more closely with the Eastern Partnership countries of Georgia, Moldova, and Ukraine. Adding these three countries to 3SI would help bring more coherence not just to the Black Sea region, but also to the greater three seas region itself. It would also provide the US with a dual benefit of taking advantage of this low hanging fruit. By supporting the 3SI, the US and Europe would be supporting not just deeper and more sustainable European integration, but would also help safeguard the EU and NATO membership-aspirant countries in the Black Sea region from greater Russian and Chinese influence. Thus, the future of the 3SI merits close watching. Will the US take advantage of this promising opportunity? Or will someone else – namely Russia and China – continue to fill these investment and development gaps in Central and Eastern Europe?