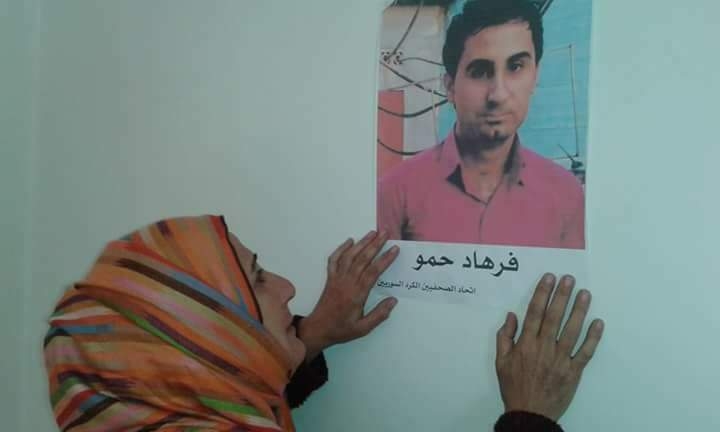 Mother of reporter Farhad Hamo looking at a photo of her son who was kidnapped by ISIS several years ago. (Facebook)

Still unknown is the fate of Syrian citizens who were abducted by the Islamic State in Iraq and Syria (ISIS) many years ago when the group held control of large swaths of Syrian and Iraqi lands.  Numerous international institutions and advocacy groups, including Human Rights Watch, have been calling for efforts to uncover their fate.

Thousands of Syrians, Iraqis, and other Arab and foreign nationals are still held in ISIS prisons. Farhad Hamo, a Kurdish reporter at Rudaw channel, was among journalists kidnapped by ISIS in late 2014, in addition to Lebanese photographer Samir Kassab who was held by the group in mid-October 2013.

Aras Hamo, brother of the Kurdish reporter, stressed that his family has been following up with officials of Syrian Democratic Forces (SDF), who announced that they had completely eradicated ISIS in Syria in late March, 2019, with assistance of the US- led coalition fighting the terrorist group in Syria and Iraq.

“There are no tangible or real developments in the case of my brother and other kidnapped civilians so far, although ISIS collapsed two years ago,” Hamo told Majalla.

The journalist’s brother demanded local and world agencies to determine his brother’s fate along with other people, who have not been heard from since they were kidnapped by ISIS fighters between 2013 and 2015. He stressed that it is necessary that “all local and international parties work more seriously to reveal what happened to those people.”

“The US-led coalition against ISIS should also help in solving this humanitarian case by cooperating with the Syrian Democratic Forces, particularly since there are thousands of ISIS elements held in SDF prisons who may have information about our kidnapped people,” Hamo added.

Similar to the family of the Kurdish journalist, thousands of families live in the same misery and have been waiting for their children either to return back or at least for some news about them since the defeat of the extremist group in its previously controlled cities.

Dozens of kidnapped civilians were executed by the terrorist group, as confirmed by footage revealing their fate. One video showed four Kurds who were shot dead in 2019 by teenagers described by ISIS as “Ashbal Al-Khilafah” (the Cubs of the Caliphate).

A family member of a Kurdish Syrian citizen who was executed by ISIS said, “We were waiting for his return but, when we watched what befell him in the footage released by ISIS, we stopped waiting.”

He told Majalla, “We found his body after the group was driven out of Syria but so far we don’t know what happened to his son who was kidnapped with him.”

According to families of kidnapped Syrians, most of them came from Kobani (Ayn al-Arab), Al-Hasakah and Qamishli, and were kidnapped while crossing cities which were controlled by ISIS, such as Manbij and Raqqa.

Many others came from Raqqa and rural areas of Al-Hasakah and Deir Ez-Zor Governorates and were kidnapped there when ISIS had control of these territories.

Although Syrian Democratic Forces discovered dozens of mass graves in cities that were controlled by ISIS for years, only few families could recognize their members among the dead bodies, according to statistics by local and international agencies.

Most of such graves found by the SDF and International Coalition forces are located in rural areas of Raqqa, which was an ISIS stronghold in Syria years ago.

So far no accurate numbers of the people kidnapped by ISIS have been reported, but local agencies said “they amount to 8,540 people.”

According to the Violations Documentation Center in Syria, 450 out of 8,540 people came from the Kurdish-Syrian city of Kobani.

“There is serious negligence in these civilians’ case,” a local official said.

The official who works at the center observing ISIS crimes in Northern Syria added, “ISIS expansion in Syria was accompanied by horrifying public atrocities, the most prevalent of which were wide-range detention and kidnapping with thousands kidnapped from their homes or cars at ISIS checkpoints most of whom have been missing since.”

HOW WERE THESE PEOPLE KIDNAPPED?

On May 29, 2014, ISIS hoodlums detained 205 students aging 14-16 while they were returning home to Kobani from Aleppo after sitting for their preparatory exams.

Although the group released them later, thousands of other people are missing with their fates unknown. The students testified that they were subject to brutal torture and beating by electric cords. They were also forced to watch videos of beheadings.

Since May 7, 2014, contact has been lost with 16 teachers from Kobani after they were kidnapped by ISIS at a group-held crossing on their return from Aleppo.

On February 18, 2014, ISIS held 150 Kurdish Syrian passengers who were travelling to the Iraqi region of Kurdistan to work or study, in addition to further thousands whose capture was not documented.

The official at Violations Documentation Center explained that “some organizations exert a huge effort in these cases through coordinating with the families of those missing, especially after the announcement of a newly discovered mass grave. However, nothing was achieved.”

He added, “many meetings were held between these families and local officials of the Autonomous Administration. Moreover, files of missing people were shared with the UN Independent International Commission of Inquiry on Syria in order to gain international support.” Describing what happened as “genocide against Syrians, particularly the Kurds,” the official stressed that “it requires international acknowledgement.”