The Story of a Famous Ramadan Ritual 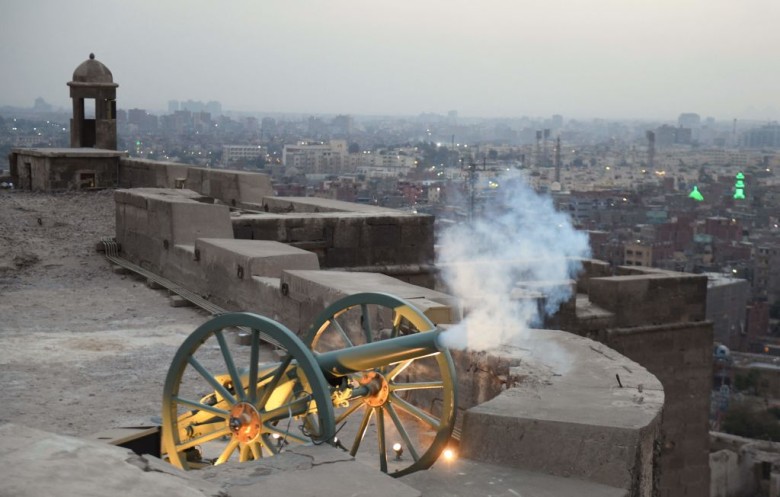 A Ramadan cannon is fired to mark the breaking of the fasting during the Muslim holy month of Ramadan at the compound of the citadel in the Egyptian capital Cairo on April 13, 2021. (Getty)

After 30 years of absence, Cairo reclaims one of its oldest Ramadan traditions. Last week the Egyptian Ministry of Tourism and Antiquities happily announced the reclaiming of one of Egypt’s dear Ramadan traditions –  The Ramadan Cannon.

The Cannon is located at the Square of the Police Museum inside the premises of the Saladin Citadel in Cairo and has undergone years of restoration. Finally, the government has it ready to fire on the first day of Ramadan.

The Holy Month of Ramadan is cherished by Egyptians who manifest their love and appreciation of Ramadan through the endless rituals and traditions that make it a very unique month of festivities, unmatched by any other country.

“Iftar Cannon Fire!” is a phrase that Egyptians grew up with, meaning that it is time for Iftar and usually the cannon blast is followed by the maghreb prayers.

Lanterns lighting up the sleepless streets, free Rahman banquets, long nights of prayer, praise and sufi chants – all of this festivity starts on the first day of Ramadan after the radio and television announce “Iftar Cannon Fire!”

The idea of using this cannon, started in 865 Hejra during Maghreb prayers in the reign of the Mamluk Sultan Khashqadam.  The Sultan was simply having a new cannon test fired and the time coincided with the Maghreb prayers, reads the official website of Cairo Governorate.  Since the Egyptians thought the Sultan was celebrating the beginning of the Holy Month, they went to the Sultan’s palace to thank him for the sweet gesture and so the Sultan made it a Ramadan ritual.

There is another story associated with the beginning of this Ramadan ritual.  Word has it that some of Khedive Ismail’s soldiers were cleaning a cannon and it fired coincidently at sunset during the month of Ramadan.  The people thought that it was a new ritual to add for Ramadan and were very happy about it.  Princess Fatima, daughter of Khedive Ismail, liked the idea and asked that a cannon be fired during Ramadan to signal Iftar, the fasting hours and also during national holidays.

Soon the idea was picked up by Arab countries starting with the Levant and Jerusalem, then Damascus, Baghdad in the late 19th century and later followed by the Gulf States.