Photography Has Gotten Climate Change Wrong from the Start 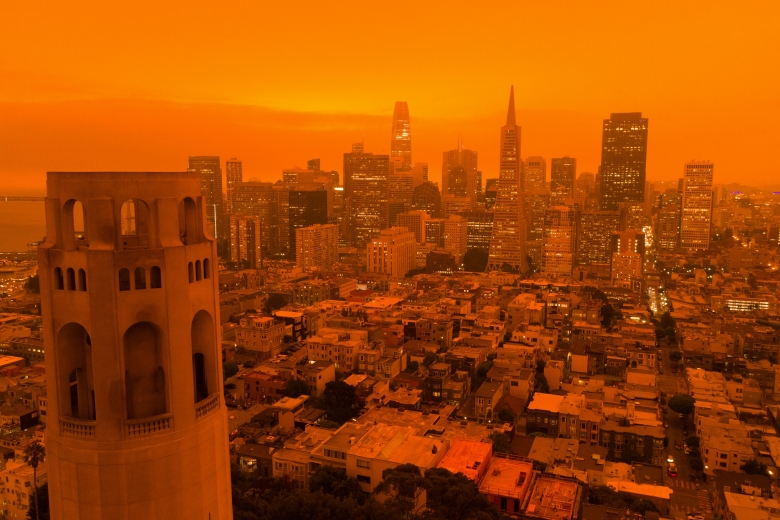 I knew something was wrong the minute I woke up. On September 9, the sky was still dark at 7:15 a.m. Eventually it revealed a deep-orange light, darker and dustier than any sunset. After a dry lightning storm in late August had sparked more than 900 fires around California, high-altitude smoke hung over the San Francisco Bay Area. I took a photo out the window with my iPhone. It wasn’t right. I tried again, tapping the screen and dragging the exposure slider down. Still, the tawny orange of the sky didn’t register.

The iPhone rendered it a pale yellow, the foreboding automatically corrected by the camera’s built-in software. Manually fiddling with the controls, I darkened a few images and increased the warmth. Then I watched as my Instagram and Twitter feeds filled up with nearly identical views from all around the Bay Area, many accompanied by captions describing the difficulty of taking the picture. No software engineer had predicted this apocalyptic scenography—created by an unusually active fire season that kept consuming forests deep into November. So phone cameras had busily corrected the unnatural view, making it seem more like a pretty picture rather than what it was: a terrifying and true example of the effects of human-generated climate change.
News articles portrayed smartphone photographers’ dilemma as something of a novelty. The San Francisco Chronicle quickly published an explainer online: “Why your phone camera can’t capture Northern California’s orange sky.” Yet anthropogenic forces reshaping the environment have flummoxed photographers before. Many improvements in photographic technology aim to enhance what we see, offering up the world as we imagine it or want it to be. Sometimes we struggle to understand the gulf between the representation and the gross reality before our eyes. Sometimes photos help us understand a changing climate; sometimes they obscure it.

In the mid-19th century, England’s infamous industrial smog was blamed for the poor quality of early photographs made there. Daguerreotypes, the first publicly available photographic process, can possess exceptional detail and luminosity, but critics at the time found English daguerreotypes dark and ill-defined. At the first World’s Fair, held at London’sCrystal Palace in 1851, American photographers won three of the five medals awarded to daguerreotypes. One correspondent from the United States wrote of the exhibition: “The excellence of American pictures is evident, which is to be accounted for by several reasons. In the first place, American skies are freer from fog and clouds—from bituminous coal not being much used, the atmosphere of our cities is free from smoke.”
The smoke and industrial “fog” of London (the catchall term used for fog and smog in the 19th century) appeared frequently in descriptions of the city. Charles Dickens wrote in Bleak House of the “smoke lowering down from chimney-pots, making a soft black drizzle, with flakes of soot in it as big as full-grown snowflakes—gone into mourning, one might imagine, for the death of the sun.” Oscar Wilde cited “the yellow fog” in his poem “Impressions du Matin.”

Despite the foul-smelling evil gloom of the fog, Claude Monet relished its effect on the light. He wrote in a letter: “I can’t begin to describe a day as wonderful as this. One marvel after another, each lasting less than five minutes, it was enough to drive one mad. No country could be more extraordinary for a painter.”

Critics of English daguerreotypes blamed the smoggy skies for shadowy pictures, even those made indoors, such as portraits. However, American photographers who set up shop in London didn’t have the same problem. John Jabez Edwin Mayall, a successful Philadelphia photographer, relocated his studio to London in 1846, where he became known for the quality of his large-scale portraits. One photographic journalist wrote in 1853: “Mayall is known as the ‘American Daguerreotypist,’ and is considered about the best in London. His specimens are certainly proof that the fogs of London are not the cause of Daguerreotypists failing in procuring clear pictures; for many of his are equal to the best ever taken.”

Many photographic chemicals produced by American manufacturers and sold in Europe referred to their country of origin in the brand name, such as “Wolcott’s American Mixture,” a chemical solution that increased the light sensitivity of the daguerreotype plate. Greater sensitivity to light meant that pictures could be taken more rapidly, thereby improving the sharpness and definition of the image. Electroplating, which increased the brightness of the plate through the addition of extra silver layers, was described as “the American process.” The bitter irony is that chemical innovations in the United States would later contribute to the country’s own pollution problems.

Even though the American products and processes were well known, some critics held fast to the smog hypothesis. Not only was it a good excuse for the British photographers in an era of intense national competition, but the chemical failures of their daguerreotypes also looked uncannily like the dark clouds witnessed in London. Only a dozen years after the first public announcement of photography, people already believed that the medium should represent the world as they saw it.

This summer and fall, amateur photographers in California looked for technological tips to make their smartphone photos more accurately represent the smoke-obscured skies. Smartphones and other consumer-grade cameras offer a series of preset color temperatures: deep shade, open shade, bright sun, and fluorescent and tungsten lighting. Will your next phone include a setting for “wildfire sky” as it becomes a new reality, at least in the western United States? Seven of California’s 10 largest fires in recorded history have occurred within the past three years, five of them since August of this year.

In the 19th century, critics were so alert to the presence of air pollution that they erroneously thought it was affecting their photographs. But today, our cameras seem to deny that such anthropogenic weather even exists. A simple software fix could rectify that. Alongside all the other white-balance icons—pictures of the sun, a building in shade, and a lightbulb—wildfire sky could be represented by the burning of fossil fuels: smokestacks, airplanes, exhaust pipes, just so there’s no mistaking this tragic sight for an extraordinary one, as Monet did.

A smartphone camera is an aide-mémoire. Not only do we use it to record major events and milestones, but we snap thousands of pictures of What’s for dinner?, There’s my dog, Here are my feet, and reminders, such as Buy this brand of shampoo for me, please. Several months from now, when California is green and gorgeous again, the dusty-orange photos from this fall will show up in residents’ otherwise banal photo libraries.

In contrast, disappearance was almost a natural part of the 19th-century photograph’s life cycle, so we have few surviving examples of bad British daguerreotypes, which looked so smoggy to critics. These historic pictures may have vanished because of poor chemical fixing, or perhaps they were discarded because they just weren’t good enough to keep. In the 21st century, our trillions of photographs—good and bad, true and false representations—just might outlast us all.

Adding a wildfire-sky white-balance setting may feel too much like giving up, like accepting our fate. But these devastating weather events will most certainly continue. Climate-related catastrophes will also worsen, unless we accept responsibility for them and change behaviour on a global scale. For that, we need to remember their terrible impact on our daily lives; we need to see the orange glow casting a pall over all the other memories in its midst.

This article was originally published in The Atlantic Online