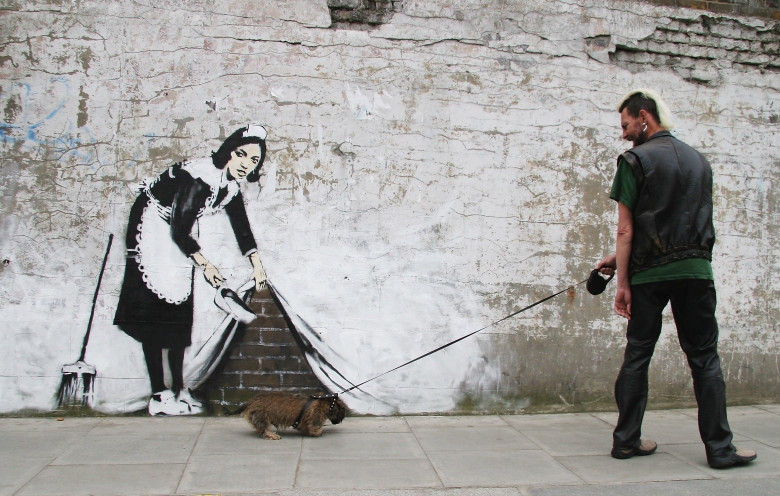 LONDON - MAY 16: Graffitti art by the 'guerilla' artist Banksy is seen on May 16, 2006 in Chalk Farm, London. The striking large scale spray-painted image entitled 'Sweeping It Under The Carpet' depicts a maid who cleaned the artist's room in a motel in Los Angeles. The piece commissioned by 'The Independent' newspaper edited on Tuesday by U2's frontman Bono, is intended to represent a metaphor for the west's reluctance to tackle issues such as Aids in Africa. (Photo by Dave Etheridge-Barnes/Getty Images)[/caption]


More than a dozen works by the elusive British graffiti artist Banksy are among a collection of street and contemporary art up for auction in Los Angeles next month.

gazaBanksy's "Umbrella Rat," an original aerosol stencil of a rat holding an umbrella that was found on a metal door in Berlin, is one of the top items on offer by Julien's Auctions, estimated between $30,000 to $50,000.

Michael Doyle, an auctioneer at Julien's Auctions, said "Umbrella Rat" could fetch as much as $100,000.

"Most of the time these (works) get covered up by the city or different private building owners so it's very rare to find an existing piece of street art that is actually from the streets," said Julien's auctioneer Michael Doyle.

Other Banksy works expected to go under the hammer at the May 11 auction include "Black Bobby," a 2003 black aerosol stencil of a British policeman estimated to fetch between $20,000 and $40,000. A 2004 screenprint entitled "Bomb Love," of a girl hugging a missile, is expected to fetch upward of $5,000.

British artist Banksy - who is presumed to be a man but has kept his identity secret - rose to prominence through the Bristol street art scene in the west of England.

He is known for creating works on buildings displaying ironic and provocative social commentary, and political stunts such as his recently opened 'Walled Off Hotel' in the Palestinian city of Bethlehem.

"In these political times, his artwork is taking on even increasing significance and being valued higher because the political message speaks to people more directly," Doyle said.

The highest price for a work of art by Banksy was set in 2008 when "Keep It Spotless," was sold for $1.8 million at Sotheby's in New York.

The auction in Los Angeles will also feature a 1975 Andy Warhol screenprint of Rolling Stones frontman Mick Jagger, estimated between $30,000 and $40,000, and works by Shepard Fairey, best known for creating the "Hope" poster for Barack Obama's 2008 U.S. presidential campaign.