The Lady Ninjas of Iran 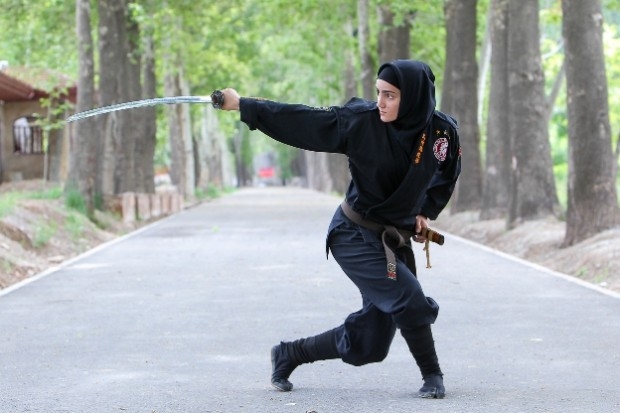 Last year, a news report that allegedly said Iranian women training as “ninja assassins” was at the center of a row that saw the news agency Reuters suspended in Iran, and a court case prosecuting the head of the agency's bureau in the country. We know now that the women in the report were practitioners of ninjutsu, a martial art that is becoming increasingly popular among Iranian women.

The following photos were taken in Karaj, near Tehran, in February 2013.

The first school to teach this martial art in Iran was opened by Akbar Faraji in Karaj in 1989. She had many problems at the beginning because she was an unknown figure in the athletics and sports worlds in Iran. Despite its Japanese origins ninjutsu was also seen as a Western import, but today it has found a place in the country.

Students of ninjutsu claim that it teaches many of the skills of the Japanese ninja, including unarmed self-defense and the use of weapons. But it also focuses on the development of self-control, patience and self-respect. Like many martial arts, its popularity is growing among Iranian women.

Fatima Muammar, a ninjutsu instructor, says: “This activity is becoming more popular with women every day, because it helps with balancing the body and the mind.”

Of the approximately 24,000 people taking part in official ninjutsu classes in Iran, at least 3,000 are women. It is these minorities who have attracted the most attention in the international media.

Martial arts in general are popular in Iran, and Iranian athletes, including women, regularly compete at an international level. For example, Iranian women competed in Taekwondo in the 2008 and 2012 Olympics.

In 2012, Reuters carried a story—with photos—of Iranian women training in ninjutsu, initially with a headline claiming they were training as assassins. This reportedly prompted some of the women to threaten to sue Reuters for defamation, and to the suspension of Reuters’ operations in Iran. Reuters withdrew the headline, and eventually issued a correction.